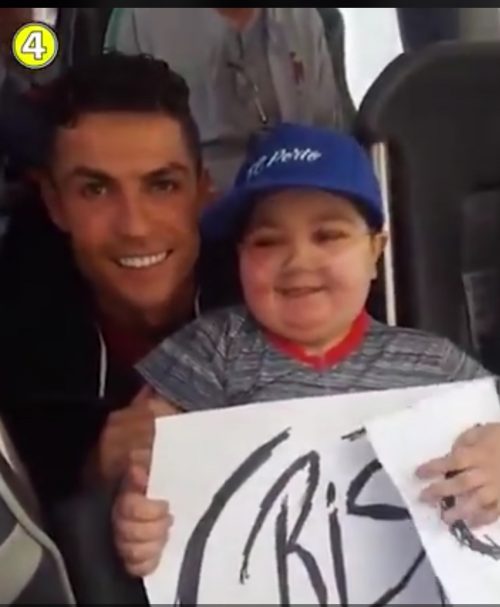 Ronaldo with the sick boy Eduardo

Amid Portugal’s preparations for UEFA League of Nations finals, Cristiano Ronaldo spared a moment on Saturday to take a photo with a young fan, battling with leukemia.

Ronaldo did not even know the 11 year-old boy was ill.

All the boy did to gain Ronaldo’s attention was to hold a poster on which Cristiano was clearly inscribed.

According to reports the mega star was getting ready to head back to the hotel with his Portugal teammates when he demanded the bus transporting them to stop.

Just outside Estádio do Bessa in Porto, Ronaldo had caught a glimpse of 11-year-old Eduardo Moreira holding up a sign asking for a hug.

Moreira, according to Portuguese outlet Flash!, has suffered from complications due to leukemia since he was two.

After stopping the bus, the forward invited Moreira on board to meet him, pose for a photo and, yes, give him a hug.