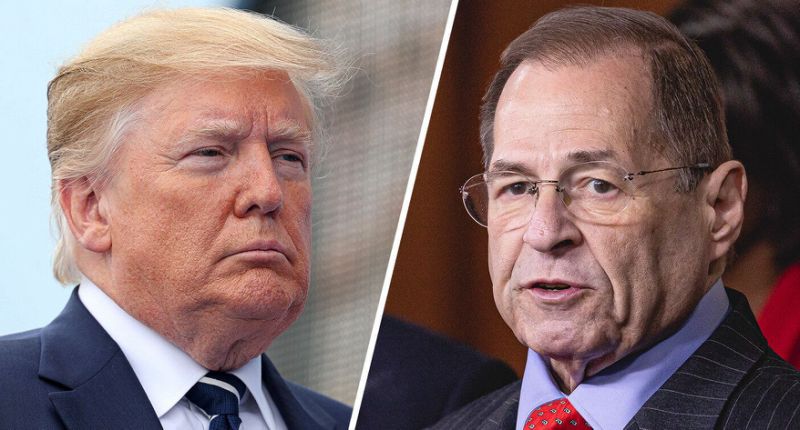 Putting aside his sharp political differences with one of his primary congressional tormentors, President Trump made a surprising get-well call to Rep. Jerry Nadler, who was briefly hospitalised in Manhattan in May.

In a report by Yahoo News, Nadler was on May 24 at an event promoting speed cameras at a school on the Upper West Side of Manhattan when he appeared to grow faint, slumping slightly forward.

Sitting next to him, New York City Mayor Bill de Blasio offered Nadler water, but the 71-year-old congressman remained apparently dazed. Medical professionals were summoned, and an ambulance transported Nadler to Lenox Hill Hospital, where he spent the night.

His staff later said that he had suffered from dehydration, probably caused by the temperature in the crowded gymnasium. His staff also said that there were no serious medical conditions from which Nadler had been suffering. “Hospital was just a precaution,” one Nadler staffer told Yahoo News.

But while at Lenox Hill, Nadler received an unexpected call, from Trump. The call has not previously been reported.

Trump and Nadler are both 70-something New Yorkers, but that has hardly brought them together in Washington. In fact, the two have been political enemies since the 1980s, when Trump sought to initiate a major real estate project on the West Side of Manhattan, which Nadler represents. Nadler and much of the community opposed the development. They ultimately prevailed.

More recently, as chairman of the House Judiciary Committee, Nadler has led several key investigations into the Trump administration. If House Democrats move to impeach Trump — which Speaker Nancy Pelosi has resisted so far — Nadler would be crucial to that effort.

Those considerations, however, were put aside at least momentarily, in favour of more human considerations, according to several people familiar with the contents of the call. A member of Nadler’s staff who would only speak on the condition of anonymity said Trump called Nadler from Air Force One as he was on his way to Japan.

The two men had last spoken in 2017, about the Gateway project, a series of long-planned upgrades to train tunnels linking Manhattan to New Jersey and serving the entire Northeast Corridor.

Trump now told Nadler that he had seen him on television, and that he thought Nadler was “tough.” Trump repeated that assessment several times, adding that he wished the congressman well and wanted to know if he could do anything more. The two men did not discuss politics or impeachment, according to a person familiar with the call.