Kevin Durant’s fresh blow to Warriors, taken out on crutches 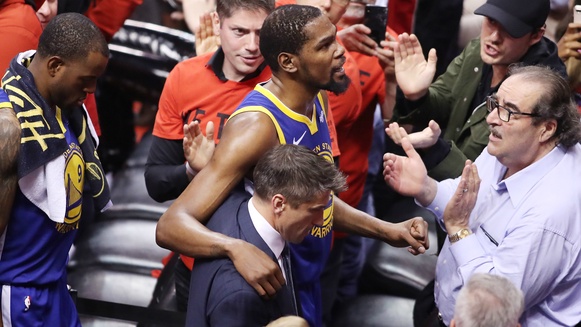 Kevin Durant being carried out of the Scotiabank Arena. He later left on crutches

Golden State star forward Kevin Durant left Monday’s fifth game of the NBA Finals against Toronto with what appeared to be a reaggravation of the same right calf injury that had kept him sidelined for a month.

He left the Scotiabank Arena in Toronto in crutches.

Warriors coach Steve Kerr said Durant, the 2017 and 2018 NBA Finals Most Valuable Player, had been medically cleared to play after missing nine games with the injury.

Durant sparked Golden State immediately, scoring 11 points in 12 minutes on 3-of-3 shooting from 3-point range and having the Warriors look like the team that won the past two NBA crowns.

But for Golden State, the joy was all-too short-lived.

With 2:14 elapsed in the second quarter, Durant planted his right foot making a move with the ball and pulled up, taking a seated position on the court and he grabbed for the calf that had kept him out so long.

Durant was helped up by a trainer and escorted off to the locker room with the help of teammate Andre Iguodala, his attempt to help the Warriors appearing to be over.

The Raptors have taken Golden State to the brink of being dethroned, leading the best-of-seven series 3-1.

Durant was the Warriors leading scorer with 34.2 points a game and also contributed 5.2 rebounds and 4.9 assists a game for Golden State before being hurt against Houston in the second round.