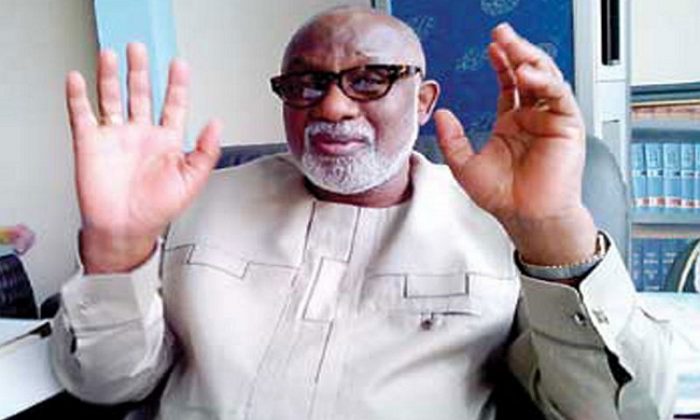 When Lucky Igbinedion was Governor of Edo State, Mr. Babajide Kolade Otitoju (former editor of TheNEWS and now a top kick at Television Continental) and I went to Benin to interview him. Kingsley Osadolor who was Information Commissioner coordinated it.

At the session, the Governor cited as part of his achievements, the fact that he climbed Mt. Kilimanjaro, that dormant volcano in Tanzania that attracts tourists the way nectar would a swarm of bees. It is, according to geographers, the highest mountain in Africa, with its summit about 4,900 metres (16,100 ft) from its base, and 5,895 metres (19,341 ft) above sea level.

“Yes, you heard me correctly, Mount Kilimanjaro! I have video evidence to show,” the Governor replied- with pride.

The way Governor Rotimi Akeredolu boasted about his encounter with kidnappers recently was exactly the way Igbinedion spoke about Kilimanjaro (he has access to good food and quality and expensive Medicare). Akeredolu’s position smacked of trying to make mockery of the helpless populace who have no advantage of his security apparatus.

He spoke Sunday night during a live broadcast programme on Ondo State Radio-Vision Corporation (OSRC) in Akure, the state capital.

His words: “I have encountered them once and even as a governor with my crew, I remembered I had to tell my people to move on. My orderly was shaking. But I said wherever they (kidnappers) were, we would confront them.

“There is no need to run away. On my way to Ibadan the last time, we saw them and we moved but the advantage is that by the time, we shoot into the air, they scampered into the bush.

“Even if I walk they cannot kidnap me. I have passed the stage. Kidnapping is not limited to those poor people alone, and I agreed that those with convoys might be safe. It is becoming a fashion to go into kidnapping. I now know that traveling from here (Akure) to Ibadan is now a source of concern because people now go by rail. But you can go by air from Lagos to Akure and do your business; that is the advantage our government has created. “

The area where I disagree with the Governor is this: “Even if I walk, they cannot kidnap me. I have passed the stage.”

No sir, if you walk alone, you can be kidnapped! It was the security personnel with you that saved the day for you. By extension, as Nigerians travel alone without adequate security, they are abducted daily. However, I fervently pray that no evil shall befall the governor and members of his family. Disaster will never be his traveling companion. Amen