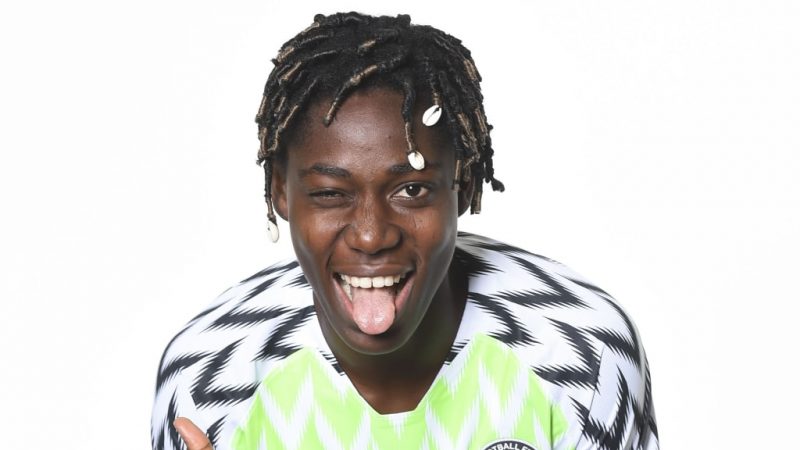 Oshoala, who was later named player of the match, struck in the 75th minute, following an assist by Chidinma Okeke to give Nigeria their second goal.

Nigeria had been gifted the first goal by Korea’s Kim Doyeon in the 29th minute in the match played at Stade des Alpes in Grenoble. Onome Ebi for Nigeria had her shot towards goal blocked by the Koreans, but Doyeon had the misfortune of putting the rebound in her own net, in the match refereed by Anastasia Pustovoytova from the Russian Federation.

The Nigerian women coached by Thomas Dennerby now have three points and go third in Group A, after losing the first game against Norway 0-3.

Oshoala remarked at the end of the match:
“At first, I think we were a little bit scared of losing and going out. But after a while we just decided to go for it. I always say that I’m never under pressure – I just go on the pitch and do my job. It’s an 11-player game and I just look to enjoy the game, have fun and do the right thing for my team. The group is wide open now. We just have to concentrate now on making sure we get the points we need against France.”


Her coach Dennerby said: “Today our discipline was better than against Norway – no mistakes at all. If we can be as compact as we were today, don’t let teams overplay us in midfield and find passes through, we know we’ll get opportunities for players like Asisat. The players followed our match plan and that’s all you can really ask. Now we go to play France, a really good team. If we can come out with a point everyone would be extremely happy. But you can’t just go to defend – you need to know what to do when you win the ball back. And hopefully we can have a little bit of success.”

And it was lamentation for the Koreans after a second loss and the prospect of going home.

“First of all, I need to apologise to the fans who cheered for us here in the stadium and back home because we did not meet their expectations. But I do believe our players did their best in today’s match. Our players had some good chances but the end result is a loss and we need to accept that. We have one match left here and I hope we can show everyone what we are capable of.”