Navy hands over 170 cartons of seized Turkey meat to Customs 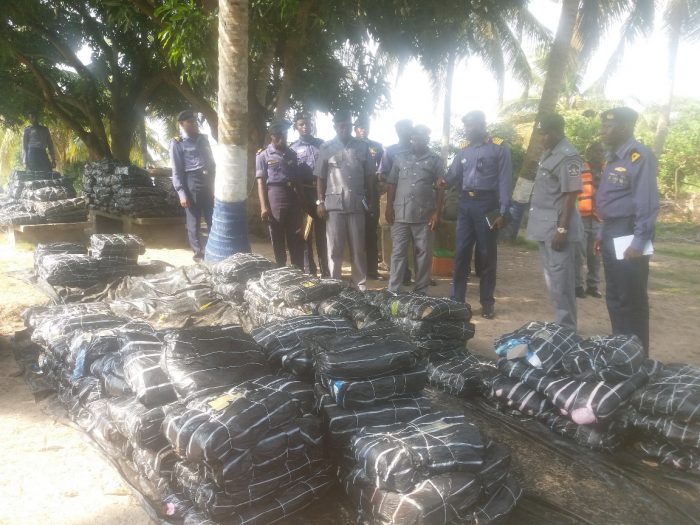 The Navy handing over the frozen turkey meat to the Nigeria Customs Service in Badagry.

The Nigerian Navy on Wednesday in Lagos, intercepted and handed over 170 cartons of frozen turkey meat being smuggled into the country to the Nigerian Customs Service (NCS).

The Naval Commander, Forward Operating Base (FOB), Capt. Tamuno Senibo, who handed over the frozen poultry products at the base in Badagry, said it was intercepted at about 1:00am on June 12.

“In a creek between Gbaji and Badagry, while we were patrolling the waters, we intercepted five wooden boats that were used in conveying about 170 cartons of foreign frozen poultry products.

“The suspects on sighting our men jumped overboard and swam away,” he said.

According to him, his men gave the suspects a hot chase while also securing the boats, adding that the products alongside the boats were intercepted along the Badagry waterways.

He said the items were carefully concealed inside the wooden boats and were being ferried into the country.

“What we have done is in line with the Chief of the Naval Staff, Vice Admiral. Ibok-Ette Ibas’s strategic guideline. The Harmonised Standard Operating Procedure (HSOP) recently launched by the President is working. It is based on the harmonisation that we went after the smugglers, seized their items and now we are handing over the seized items to the Nigeria Customs.

“My advice to criminals is for them to stay away from the country’s waterways as there will no longer be any hiding place for them. They should turn a new leaf in their own interest,” he added.

The Deputy Superintendent of Customs, Augustine Ajero, who led a team of customs officers to take over the seized products, hailed the efforts of the navy.

Ajero urged the naval men not to relent in their efforts to curtail smuggling in the country.

He however noted that smugglers could now identify patrol boats belonging to the service and tended to disappear each time they sighted such boats.