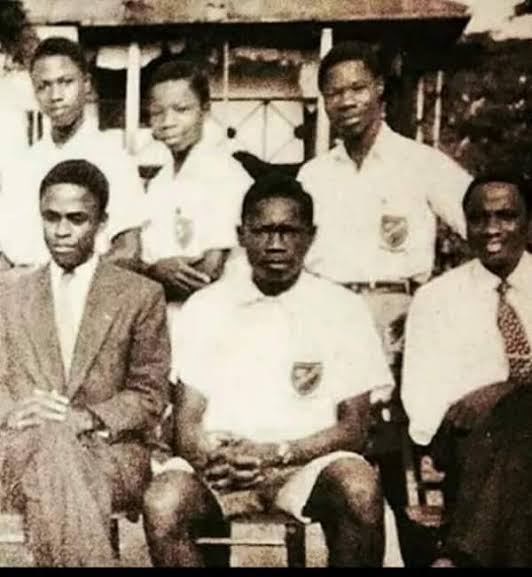 Abiola, sitting in the middle and Obasanjo, right, standing. The two were mates at Baptist Boys High School, Abeokuta

Today, 12 June 2019, Nigerians celebrated Democracy Day, made so by the enabling law signed by President Muhammadu Buhari. It was a day to mark the 12 June 1993 presidential election which was won by the late MKO Abiola, but which was cancelled by military President, Ibrahim Babangida. At the Eagle Square, Abuja, Buhari addressed the nation. Part of what he said was the he renamed an Abuja national monument as Moshood Abiola National Stadium. At the venue with him were his Vice, Prof. Yemi Osinbajo; President of the Senate, Ahmed Lawan; Speaker of the House of Representatives; Femi Gbajabiamila; the Acting Chief Justice, Justice Tanko Mohammed; Asiwaju Bola Tinubu, an old war horse in the actualisation of the struggle to actualise the June 12 electoral mandate of Abiola. Many visiting Heads of State and members of the diplomatic community were also present.

Indeed, all the participants in today’s event were beneficiaries of what Abiola died for. And they, especially, President Buhari, did a great honour to the man. An individual who was conspicuously absent was former President Olusegun Obasanjo, the greatest inheritor of Abiola’s huge sacrificial investment and the struggles of pro-democracy activists, students, human rights lawyers, journalists and many others who died on the streets while the struggle was hot.

For eight years when he was in power as President, Obasanjo who the military brought from prison and made the Nigerian leader to compensate the South West, in a manner of speaking, did nothing to honour Abiola on whose wing he sat on the throne. What could be the reason? Hatred, envy or inferiority complex or a combination of the three? Indeed, Obasanjo must be a classic case of that Bible quote: “The heart of man is deceitful above all things and it is desperately wicked”. His mind will be a great specimen for Psychologists studying how a man ought not to treat his friend!

An explanation was offered by Chief Frank Kokori, a former Secretary-General of the National Union of Petroleum and Natural Gas Workers and a leader of the June 12 movement. He once told The Punch: “We all thought it would happen immediately we were released from prison or detention. At that time, the civil society groups were very strong and we had a militant press. NADECO, Afenifere, NUPENG and others pressurised the government at the time. We thought Abiola would be released and declared winner but when he died, we started the struggle for democracy day. Then, Olusegun Obasanjo became President and then unilaterally declared May 29 as democracy day. So, since then, the battle has been on and we believed Obasanjo should have been able to do it in those eight years but we did not know that Obasanjo had this pathological hatred for people who he felt would be his rivals. He did not want anybody to shine like him. He had that phobia which I call inferiority complex.”

Kokori added that Obasanjo behaved that way to “even smaller people like us who went to prison with him. He made many promises which he never fulfilled. We were totally disappointed in him. So, it came as a big news, a shock to us when we heard the news about June 12. It came from nowhere, it came from someone we least expected to do it. I least expected Buhari to do it. I thought maybe President Yar’Adua or Goodluck Jonathan would do it but not Buhari; we thought he was never interested in the June 12 struggle because I have never really seen him talk much about it. I didn’t know he was being calculative. No matter what you say about it, he has done something great and heroic for the country. Thursday (when he made the announcement) was my happiest day.”

Also, Tundun, Abiola’s daughter, told Channels Television on Sunday, 10 June, 2018 that Obasanjo did not honour her father’s memory when he was president because he had always felt inferior to him adding that Obasanjo could not bear the thought of having been a beneficiary of her father’s democratic legacy.

Her words: “Ego is such a problem for most human beings. When you know you were not elected, you know you were selected and just appointed president by the military, it’s kind of galling for him to acknowledge a democratic process and his ego would not allow it. President Obasanjo and my father had a relationship and I think he’s always felt inferior to my father and what happened in their lifetime continues even after my father was dead. He cannot bear the idea of Moshood Abiola. This erasure that he tried to accomplish is so offensive to me. I have nothing to say to President Obasanjo.”

“It seems strange that somebody (Obasanjo) who benefited from the death of somebody else (Abiola) would be the one who’s so adamant about trying to completely erase it from history, but it’s actually not. It takes the special grace of God to humble oneself and acknowledge a debt to anybody. To say, ‘I owe this person that. I’m grateful for this’. An egomaniac cannot do that; they’re not capable of doing that. So he has to deny it within himself and other people. He has to tell himself that, ‘This all me. I earned this,’ but he did not.

“We did not have an election in 1999, we had a coronation. My father had been killed. It’s only somebody of his caliber that could die for the military to decide, ‘Enough is enough; we do have to exit the stage,’ and in order to sort of placate the south west region, they brought out President Obasanjo.

Abiola and Obasanjo ought not be enemies at all, given that they were secondary school mates.
Students at that period always form bonds that last life times. Examples of such schools abound: Barewa College in Zaria; Christ’s School, Ado Ekiti; Hope Waddel Institute, Calabar; Ibadan Boys High School; Muslim College, Ijebu Ode; Igbobi College, King’s College, both in Lagos; 3Christ the King College, Onitsha, Baptist Boys High School (BBHS), Abeokuta and many others.

At such impressionable age, Obasanjo and Abiola attended the same BBHS. The life stories of the two individuals show that they started together at a young age, went their different ways and later in life, their paths crossed.

M. K. O. Abiola, according to Wikipedia, was born in Abeokuta, Ogun State to the family of Salawu and Suliat Wuraola Abiola, his father was a produce trader who primarily traded cocoa and his mom traded in Kolanuts. His name, Kashimawo, means “Let us wait and see”. Moshood Abiola was his father’s 23rd child but the first of his father’s children to survive infancy, hence the name ‘Kashimawo’. It was not until he was 15 years old that he was properly named Moshood, by his parents. Abiola attended African Central School, Abeokuta for his primary education. As a young boy, he assisted his father in the cocoa trade, but by the end of 1946, his father’s business venture was failing precipitated by the destruction of a cocoa consignment declared by a produce inspector to be of poor quality grade and unworthy for export and to be destroyed immediately.

At the age of nine he started his first business selling firewood gathered in the forest at dawn before school, to support his father and siblings. Abiola founded a band at the age of fifteen and would perform at various ceremonies in exchange for food. Abiola was eventually able to require payment for his performances, and used the money to support his family and his secondary education at the Baptist Boys High School Abeokuta. Abiola was the editor of the school magazine The Trumpeter, Olusegun Obasanjo was deputy editor. At the age of 19 he joined the National Council of Nigeria and the Cameroons ostensibly because of its stronger pan-Nigerian origin compared with the Obafemi Awolowo-led Action Group.
To continue reading, click here: https://www.thenewsnigeria.com.ng/2019/06/news-analysis-june-12-democracy-day-and-humiliation-of-olusegun-obasanjo/