Adebutu: How Nigeria can become a better country 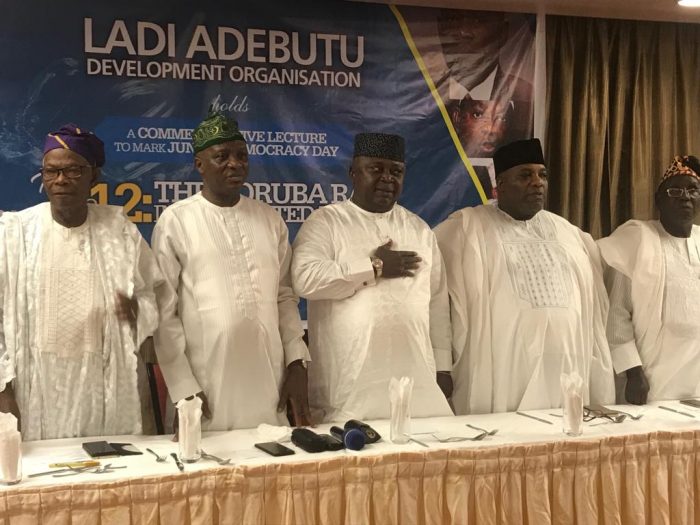 A former House of Representatives member, Ladi Adebutu has called on Nigerians to live in harmony, unity, love and fear of God in Nigeria to make it a better country.

He made this call during a commemorative lecture organized by Ladi Adebutu Development Organization in Abeokuta to mark the Democracy Day, in commemoration of the annulled June 12, 1993 general election.

Adebutu urged Nigerians not to forget what happened on June 12, 1993 and its significance to all who knew what true democracy stood for because the victory of that day was not for a zone or two zones in the country but for all zones.

“June 12 means a lot to Nigerians and that was why we are celebrating it today. It is one that is universal, it is the foundation of our contemporary politics today. It is a watershed that I will never forget. We are not practising true democracy.

“The efforts which MKO Abiola made in uniting all tribes cannot be undermined. He sacrificed for the people. So also his wife, Kudirat Abiola.

“Where are we today? I will say we have gradually gone down. Every electioneering process has always given way for tragedy,” he lamented.

He also noted that since the 1993 election was annulled, there had been no regards for human lives in Nigeria, especially under President Muhammadu Buhari’s administration.

“No regard for human life in the current administration. We must ask ourselves as Yoruba people, where do we go from here, when there is no unity among us? We are sinking like sheep without shepherd,We are sinking like people without direction.

“I opine that we are gradually going down the slope. Every electioneering process has always given way to worse one, endangering our democracy,” he said.

“The influence of ethnic consciousness on the politics of the ‘Third World’ especially the modern states of Africa cannot be overemphasized. Virtually all the new states of Africa are pluralistic societies made up of heterogeneous ethnic groups,” he said.