Crude Tanker on fire in Gulf of Oman, oil prices go up 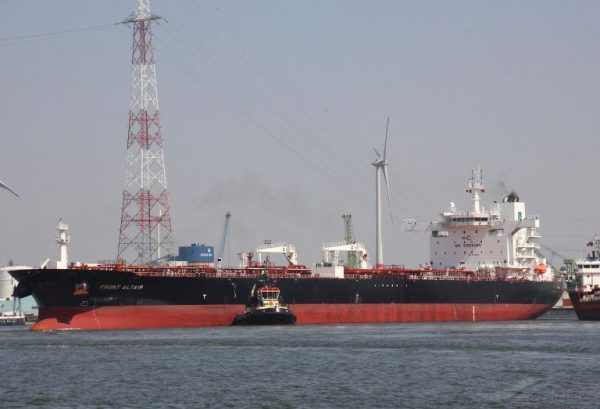 Oil prices surged on Thursday after a unit of the United Kingdom’s Royal Navy reported a tanker, Front Altair being gutted by fire in the Gulf of Oman near the Iranian coast.

The United Kingdom Maritime Trade Operations, which is run by the British navy, put out the alert early on Thursday. It did not elaborate but said it was investigating.

Tanker Front Altair was on fire, an official at the U.A.E. port of Fujairah and a person with knowledge of the matter sconfirmed. It wasn’t immediately clear what the cause of the fire was.

According to Reuters two tankers have been evacuated after an incident in the Gulf of Oman and the crew are safe, four shipping and trade sources said on Thursday.

The sources identified the tankers as the Marshal Islands-flagged Front Altair and the Panama-flagged Kokuka Courageous.

US Fifth Fleet have also confirmed receiving distress calls from two ships attacked in Sea of Oman, and were providing assistance to the two oil tankers.

“We are aware of the reported attack on tankers in the Gulf of Oman,” said a statement from the Fifth Fleet, based in Bahrain.

“US naval forces in the region received two separate distress calls at 6:12 am. local time and a second one at 7:00 am,” the statement said.

“US Navy ships are in the area and are rendering assistance.”

Reports of a tanker on fire in the Gulf of Oman followed the earlier sabotage attacks on vessels near the Fujairah emirate, one of the world’s largest bunkering hubs and located just outside the nearby Strait of Hormuz.

The incident comes as Iranian media claimed that there had been an explosion in the area targeting oil tankers.

Thursday’s maritime alert comes after what the U.S. has described as Iranian attacks on four oil tankers nearby, off the coast of the United Arab Emirates. Iran has denied being involved.

U.S. National Security Adviser John Bolton said on May 29 that naval mines “almost certainly from Iran” were used to attack the tankers off the United Arab Emirates last month, and warned Tehran against conducting new operations.