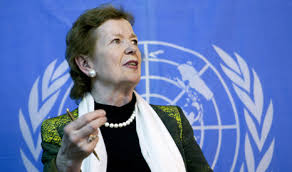 Former President of Ireland, Mary Robinson, on Wednesday said the United Nations Security Council had “failed to live up to its responsibilities” in conflict prevention.

Addressing members of the council at its 8546th meeting in New York, Robinson berated “certain permanent members” of the Council for wrong use of their veto powers.

She said the abuse was more apparent during votes on resolutions aimed at conflict prevention.

The meeting was convened to discuss how best to better utilise the tools at the disposal of the UN and the council for a more effective and efficient multilateral approach to conflict prevention and mediation.

Robinson spoke as Chairperson of The Elders, a group of independent global leaders founded by Nelson Mandela to promote good governance and ethical leadership.

She said: “Over the decades, the Council – and, particularly, its five permanent members – has failed to live up to its responsibilities.

“It has favoured realpolitik or short-term power stratagems rather than meeting the solemn commitments outlined in the UN Charter.

“Nowhere has this been more apparent than in the repeated use of the veto by certain permanent members on resolutions aimed to prevent mass atrocities, including the use of chemical weapons on civilians.”

Robinson urged the Council to approach the issue of conflict prevention and mediation in the “spirit of inclusive dialogue and willingness to work for compromise and consensus in the interests of peace.”

Former UN Secretary-General Ban Ki-moon spoke in similar vein, calling for improvement in the working methods of the Council.

“Faced with complex, multi-faceted and gravely serious challenges, it is profoundly irresponsible that politicians collude in or deliberately stoke illusions for their own gain.

“This is in full knowledge that no one country, however powerful, will be able to meet the global challenges on its own,” Ki-moon said.

The former UN chief called for unity and cooperation among members of the council especially in the area of conflict prevention and mediation.

He added: “When the Security Council can cooperate and speak with a strong common voice.

“This strong, common voice is needed more than ever at this current time, when the deceptive allure of populism and isolationism is growing across all continents, from North and South America to Africa, Asia and Europe.

Earlier in his remarks, incumbent UN Secretary-General Antonio Guterres, said conflict prevention and mediation were two of “the most important tools at our disposal to reduce human suffering”.

Guterres also urged the Council and all member states “to strive for greater unity so that prevention and mediation efforts are as effective as possible”.

This, he noted, is “the only way to meet our responsibilities to the people we serve”.

“When we act early, and are united, we can successfully prevent crises from escalating, saving lives and reducing suffering – fulfilling the most fundamental mandate of the United Nations,” he noted.

To this end, he told the chamber that the UN was working with various parties to conflict, together with partners for peace, in regions and countries across the world.

He noted some “encouraging signs”, such as the constitutional transfers of power in Mali and Madagascar, and the rapprochement between Ethiopia and Eritrea.

Others, according to him, are the revitalised agreement in South Sudan; and, after decades of dispute, “the designation of the Republic of North Macedonia to be internationally recognised”.