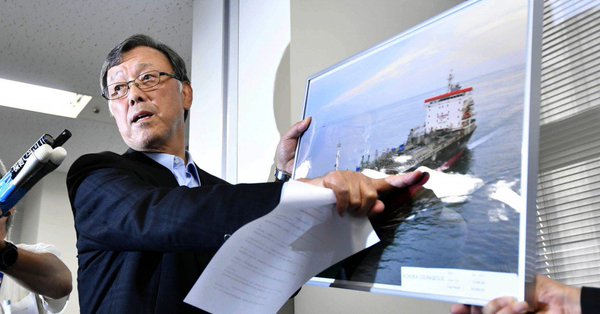 Yukaka Katada, the owner of one of the stricken oil tankers crippled in explosions in the Gulf of Oman on Thursday, said the U.S. is wrong about the way the attack was carried out.

Speaking at a press conference in Tokyo on Friday, he contradicted Secretary of State Mike Pompeo and the U.S. Navy, which released a video that purports to show an Iranian patrol boat removing a limpet mine from the port side of the Kokuka Courageous.

Katada said his ship was attacked on the starboard side by a flying object, not by a mine, allegedly planted by Iran.

“It seems that something flew towards them. That created the hole, is the report I’ve received,” Katada said, according to the Financial Times.

“It seems there was a high chance they were attacked by a flying object. The impact was well above the water. I don’t think it was a torpedo.”

The Japanese ship owner did not say who might be responsible for the attack. Iran has vehemently denied it was involved.

A video released by the U.S. Navy Friday morning appeared to show an Iranian Revolutionary Guard patrol vessel removing an unexploded limpet mine from a commercial oil tanker struck in an attack in the Gulf of Oman Thursday.

The Associated Press reported the actions suggest the Islamic Republic “sought to remove evidence of its involvement from the scene.” On Thursday, the U.S. Secretary of State Mike Pompeo blamed Iran for the attack on the Norwegian and Japanese oil tankers.

“Iran categorically rejects the U.S.’s unfounded claim with regard to 13 June oil tanker incidents and condemns it in the strongest possible terms,” its statement said.

The U.S. “immediately jumped to make allegations against Iran—[without] a shred of factual or circumstantial evidence” and was “sabotaging diplomacy,” Iranian Foreign Minister Javad Zarif tweeted.

The U.S. Navy also responded to the explosions on the oil tankers on Thursday, evacuating several of the mariners.