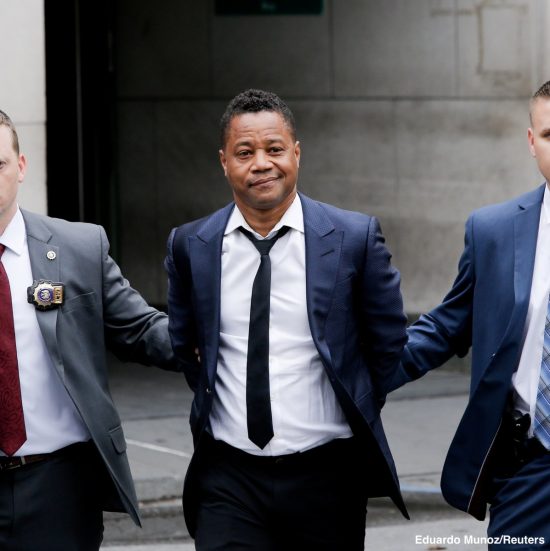 Actor Cuba Gooding’s lawyer, Mark Heller is confident that the security footage of the alleged groping incident in a New York rooftop bar will exonerate the actor.

Heller told reporters at a press conference in New York Thursday : ‘In my 50 years, almost, of practicing law, I have never seen a case like this one because there is not a scintilla of criminal culpability that can be attributed to Mr Cuba Gooding Jr. after I have extensively, with my staff, reviewed the video of almost two hours which reflects the entire event for which we are here today.

“‘Mr Gooding has not acted inappropriately in any shape or form. Nothing in the video could even be considered ambiguous and I, frankly, am shocked and horrified that this case is being prosecuted.’

Gooding Jr pleaded not guilty on Thursday after being charged with forcibly touching and sexually abusing a woman in a bar.

The Jerry Maguire actor voluntarily turned himself into the NYPD on Thursday to face questioning over claims that he groped a 29-year-old woman in a New York bar.

Cuba, 51, is accused of grabbing her breast while partying at the Magic Hour Rooftop Bar & Lounge in Manhattan on 9 June. The actor smiled as he walked into the court for arraignment, handcuffed and flanked by two police officers.

Cuba was handcuffed and flanked by police.

Personally addressing the allegations, Cuba previously said: ‘There’s a tape that shows what really happened. I believe in the system and let the process speak for itself.’

Heller also disputed allegations from a second woman, who accused Cuba of grabbing her buttocks at a New York restaurant in 2008.

The attorney stated: ‘There is no pattern of conduct. It is not uncommon for people to come out of the woodwork when these things happen.’

Rising to prominence in the early 1990s, Cuba is best known for appearing in movies such as Boyz N The Hood, A Few Good Men, Selma, Lee Daniels’ The Butler and Jerry Maguire, which earned him an Oscar for best supporting actor.