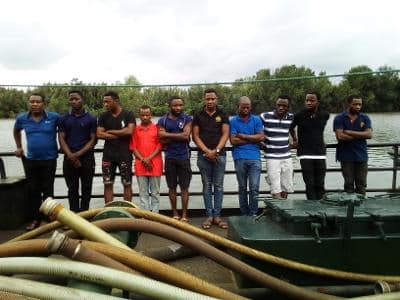 According to the Naval Handing Over Officer, Navy Captian K. O Oguntuga, the suspects were arrested on May 23, 2019 along Onne Channel, Port Harcourt, Rivers State. He also said that the Vessel conveying the suspects was laden with over 800 metric tons of products suspected to be illegally refined Automotive Gas Oil, AGO.

Senior Detective Inspector Bala Mohammed who received the suspects and Vessel on behalf of the EFCC, assured the Navy of diligent investigation and possible prosecution of the suspects.