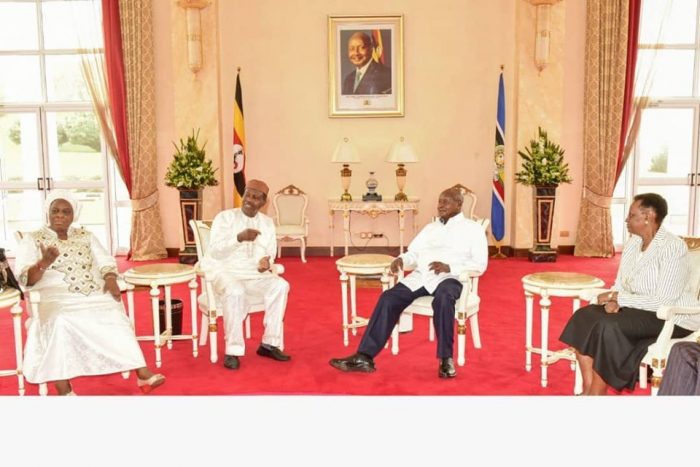 Pastor Adeboye, who is in Uganda at the invitation of the Redeemed Church of God, Uganda, together with his wife, is slated to hold a number of Christian public meetings at Kololo Independence Ceremonial grounds in Kampala starting today 13th to Saturday 15th June 2019.


In a cordial meeting held at State House Entebbe on Thursday, President Museveni received blessings in form of prayer from Pastor Adeboye.

The Pastor invoked God to bless Mr. Museveni with good health, prosperity and the continued wisdom to lead Uganda peacefully.


President Museveni was happy to note that the Pentecostal Churches were now participating in projects that were creating prosperity for themselves and other people.

“Christians are now learning how to create wealth on earth as per the parable of the talents. Earlier on, they were laid back, and withdrawn on earth waiting for God. This was a means of escapism from living well. I now have a Bishop like Lwere involved in wealth creation projects,” he said.

The President reiterated that while he had earlier had arguments with some teachings of the Christian doctrine movements in his student days, the Pentecostal Churches were now integrated and were helping the people.

“A while back, the Balokole were being harassed by some religions. They were saying that they were liars and enthusiasts who claimed that they performed miracles. I told these people that I had no problem with them. If they were lying, only God would deal with them,” he said.


Pastor Adeboye thanked President Museveni for keeping peace in Uganda, adding that it was the role of Christians to have influence in all facets of life including their wellbeing.

“The Lord wishes that we prosper in our lives and health even as our soul prospers. We cannot do the work of God when there are no resources. God wants us to prosper,” he remarked.