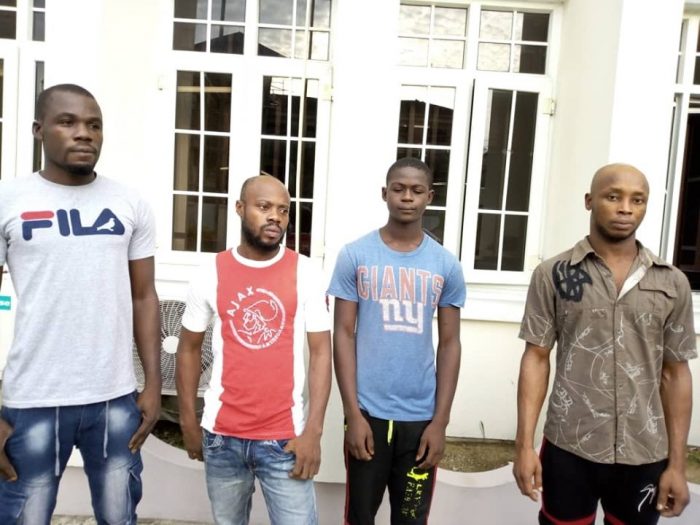 The court was presided over by Justice S. A. Amobeda. The quartet pleaded guilty to a two-count charge brought against them by the Commission.

Similarly, the judge also convicted and sentenced two internet fraudsters (Yahoo boys), namely: Dugbo Kenny and Uchunor Awele Anthony to six months imprisonment with N50,000 option of fine of each. They equally forfeited all the instruments used in the commission of the crime to the federal government.

The petroleum product dealers-Afa Emmanuel, Justice Ebanga, Effiong Gilbert and Sakwe Felix-were each sentenced to six months imprisonment with N100, 000 option of fine each and also suffered a final forfeiture to the federal government of a total of 105 drums, containing Premium Motor Spirit [petrol] they were arrested with as well as the wooden boat they used in the illegal activity.

The illegal petroleum dealers were arrested on April 28, 2019 by the Nigerian Navy Ship NNS Victory Calabar on board a wooden boat loaded with 105 drums of Premium Motor Spirit, and were subsequently handed over to the EFCC on May 7, 2019 for further investigation and prosecution.

One of the charges against them reads: “That you Afa Emmanuel, Justice Ebanga, Effiong Gilbert and Sakwe Felix on or about the 28th day of April 2019, while transiting from Oron to Cameroon along, Calabar Channel, within the jurisdiction of this honourable court did conspire among yourselves to commit an offence to wit: did store about 31, 500 litres of Petroleum products ( Premium Motor Spirit) meant for distribution, which product you loaded in about 105 drums and conveyed in a large- sized wooden boat, without appropriate licence and thereby committed an offence contrary to Section 4(1) of the Petroleum Act CAP P10, Laws of the Federation of Nigeria, 2004 and punishable under Section 4(6) of same Act.”

The ‘Yahoo boys’, jailed by same court were arrested by operatives of the EFCC in Calabar, following intelligence report. A forensic analysis of their laptop and phones, led to the retrieval of several fraudulent documents. In the course of the trial, the convicts made confessional statements and admitted that they were internet fraudsters who specialise in impersonation and defrauding their victims under false pretence.