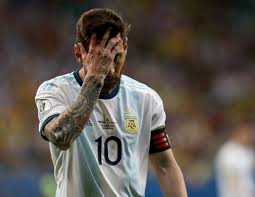 There is nothing Lionel Messi craves more than winning a trophy with Argentina.

But his side’s haphazard performance in the 2-0 Copa America defeat by Colombia on Saturday laid bare the difficulty of the task he faces.

Messi, 32 later this month and who is running out of chances to lift a trophy with Argentina, had warned that they were far from favourites to win this Copa America.

His assessment was gloomy but also realistic – Argentina have a rookie, caretaker coach in Lionel Scaloni who was taking charge of his first competitive game.

Also, the team consisted of many inexperienced players who mostly play for non-elite clubs.

His prediction was vindicated as Argentina were overwhelmed in the first half by Colombia.

They denied Messi space as he failed to make a single pass to strike partner Sergio Aguero before half-time.

Argentina came alive after the break and Messi missed a glaring chance from close range and he was upstaged down the other end by a superb goal from Colombia’s Roger Martinez.

“We leave here feeling bitter about this defeat. We didn’t want to start like this, but now we have to lift ourselves up and stay calm and keep going,” Messi told reporters.

He returned to the national team in March after taking a break following the 2018 FIFA World Cup in Russia.

“It will take a bit of time to digest this defeat, but we can’t keep regretting it. We have to focus on the positive things we did.”

Argentina’s attention now turns to Wednesday’s match with Paraguay, before their final Group B fixture against Qatar next Sunday.

They need to finish in the top two to guarantee their place in the quarter-finals but could also qualify by finishing third.