Buhari, “next level” and the burden of expectations 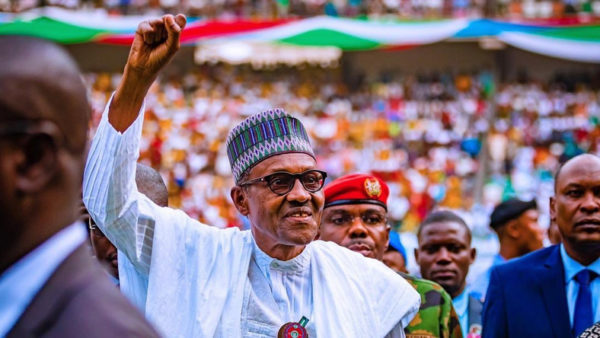 On May 29, President Muhammadu Buhari took oath of office for the second time as Nigeria’s president.

He was first sworn-in on the same date in 2015 as president, after his election victory preceded by intensive campaign mantra — “change”.

Considering the “change” mantra in 2015 and what it entails, expectations were high, especially in the provision of adequate security and working economy that had been parts of the country’s challenge before Buhari’s inauguration.

After the first tenure of four years in office of Buhari, Nigerians are expressing diverse opinions about the president’s stewardship in that regard.

While some believe that the president has done well considering the myriad challenges he met when he first assumed office, others, especially opposition politicians, believe that not much has been achieved since Buhari took the mantle of leadership in 2015.

The government insists that it has concentrated much of the attention on fighting insecurity, corruption and revamping the country’s distressed economy.

The government claims that it has also succeeded in curtailing the impunity of the Boko Haram insurgent group that had, hitherto, occupied some local government areas in the north-eastern states of Borno, Yobe and Adamawa.

The Nigerian security agents also note that they have restricted insurgent activities to the fringes of the Sambisa forest and substantially degraded the evil, terrorist group.

The Federal Government claims that it has recorded huge successes in its anti-corruption war by making recovery of looted national assets and prosecuting hundreds of corrupt former government officials.

Analysts, however, observe that Buhari’s administration been commended for revamping and diversifying the mono-product Nigerian economy by investing heavily in the agriculture revolution, and massive infrastructure upgrade.

They express optimism that the second tenure of the present administration will address certain challenges that are dragging the country’s development.

They admit that expectations are high, especially on how to consolidate on the previous achievements of the present administration.

Dr Ibrahim Shuwa, a sociologist, says Buhari’s administration is expected to provide urgent solutions to the socio-economic challenges facing the nation and its citizens.

He suggests that the people’s expectation for a pragmatic change in every aspect of national life is quite high.

“The people’s expectation for a pragmatic change in every aspect of national life is quite high and if they fail to see changes soon, they will be somewhat disillusioned,’’ he notes.

Shuwa, however, notes that while some Nigerians appreciate the enormity of the challenges facing the country, others want nothing short of quick solutions to the problems.

Sharing similar sentiments, Mr Kunle Onas, a civil servant, recalls that Buhari has pledged to stimulate Nigeria’s economic turn-around and create the basis for its prosperity, stressing that there should be no excuses for failure in that regard.

He expresses confidence in the personality of the president and what he describes as his tested integrity to move the nation forward.

“During the campaigns, the term next level was the in-thing; we believe that Mr President already has plans in place to improve wellbeing of Nigerians based on that mantra,” he observes.

He commends the president for resolving the, hitherto, recurrent challenge of fuel scarcity, advising him to fix the country’s refineries as a matter of urgency.

Further to that, Mr Steve Ade, a contractor, advises the government to place considerable emphasis on the country’s security.

“Mr President should use his experience in the military to enhance the security of the citizens’ lives and property, especially by curtailing the Boko Haram insurgents, banditry and kidnapping that are now prevalent across the country.

“We want a safe country where citizens will be able to live and work in any part of the country without fear.

“I understand that the government has done a lot in terms of battling the insurgents but so much still needs to be done,” he observes.

Concerned about the development of the country, Buhari has consistently expressed dissatisfaction about unimpressive level of unemployment in the country in spite of the creation of several jobs in agricultural and construction sectors between 2015 and 2019.

In addition, the government says it has continued to create atmosphere that is conducive for employment generation through massive infrastructure upgrade across the country.

Irrespective of the challenges, observers insist that there is a compelling need for all Nigerians to desire to live in prosperity, considering the nation’s natural endowments.

However, Buhari has pledged to meet aspirations of Nigerians, advising them to be realistic in their expectations from his government.

“We shall correct that which does not work and improve that which does. We shall not stop, stand or idle. We shall, if necessary, crawl, walk and run to do the job you have elected us to do.

“I realise that the expectations of our people today are quite high; their commitment to change has been strong and their belief in us is unshaken.

“While we pledge to begin doing our best without delay, we would like to appeal to them to appreciate the gravity of our situation so that we become more realistic in our expectations,” he promises.