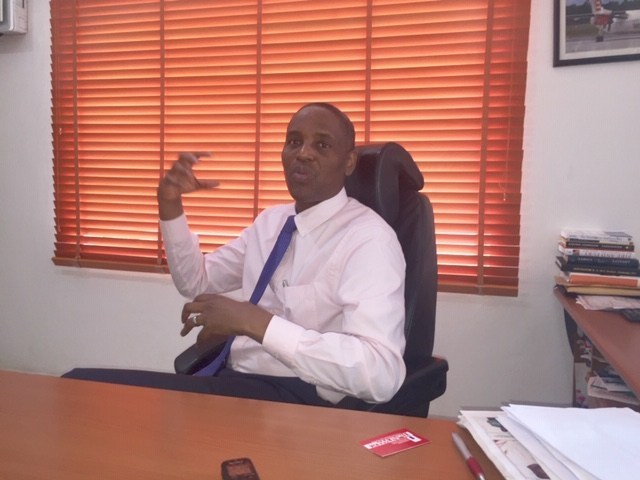 Aero Contractors was first formed in 1959 in the Netherlands before being officially registered in Nigeria in 1960. At inception, it was wholly owned by Schneider Airways B.V. of the Netherlands. Aero. as widely reported in the media, later became a partly Nigerian-owned company with an initial 40 per cent Nigerian shareholding in 1973. This grew to 60 per cent by 1976 in fulfillment of the requirements of compliance with the Nigerian Enterprises Promotion Decree of 1977, also known as the Indigenisation Decree. By January 2004, Schneider Airways was bought over by CHC Helicopter which acquired a 40 per cent holding in Aero, while the 60 per cent majority share remained within the lbru family. By July 2010, CHC sold its interests in Aero and the airline became wholly owned by the Ibru family until it was taken over by AMCON in 2013 due to its huge indebtedness.

In this interview with ADEMOLA ADEGBAMIGBE and YOMI OSOBA, Captain Ado Sanusi, Aero Contractors Managing Director, appraises his airline’s journey for the past 60 years, the challenges of the moment and the plans for the future.

On Tuesday, 21 May, Aero Contractors marked its existence in Nigeria and how will you describe the journey so far?

Yes, we spent a whole week marking the 60th anniversary of Aero Contractors which started in 1959 and later became Aero Contractor in 1960. The journey of course, like any business, has its ups and downs and we thank God that the company now is moving towards recovery. Of course, the company has its glorious days when it was a brand that nobody could deny that it is a household name. The brand was built based on safety, reliability . Oil and gas companies were depending on it especially the early 70s towards mid 90s when the oil and gas industry was booming and the company was the major logistics operator for oil and gas, especially international oil and gas companies. At a time, we had the monopoly of all the oil and gas out of gulf of guinea, mostly everybody knew Aero Contractors and eventually we ventured into airline business . We later went into mainstream airline, of course with the down turn of the economy and also with the fall in the naira value, that affected it and it resulted into Aero Contractors going into a kind of insolvency, a time when as I said in my speech, threatened its existence as a company.

Fortunately, very very fortunately, the federal government looked at the brand, Aero Contractors in time, age, it is the oldest company in the country regarding aviation and also the staff that were employed and it decided that no, it is not a company that should  be allowed to die. So, through AMCON, they came with the mandate of turning it around to inject new investors, new blood to make sure that the company goes back to stabilization and goes back to recovery, to life, and that was when I was appointed Managing Director/CEO. The company was put under receivership and then we were given the task to stabilize the business and move it forward.

Since inception, AERO has never had any fatality apart from one helicopter crash. How has the company been able to maintain that safety record? Or do you operate with different aircraft?

We have the same brand of aircraft but we maintain our aircraft ourselves and the high standard of maintenance is a contributing factor to our safety record. We maintain our airplanes by ourselves and the other factor is the culture, we have a safety culture, if it is not ok, if it is not serviceable, we will not go. We will rather delay an airplane or cancel a flight or drop an airplane; we will not manage. In AERO Contractor, there is nothing like manage in this sector, if it doesn’t meet the standard, it is grounded, if it doesn’t meet the regulatory aspect of it, it is grounded, so there is no cutting corners, we maintain our airplanes, highest standard and this is how it is. I mean the culture has been there right from 1959, a culture of high standard of maintenance, high standard of   safety and that is what we have developed over the years. So to answer your question, we have the same brand of airplanes  but our standard of safety is higher.

When you were appointed in February 2017, were you scared? If not, why not?

No. When I was appointed in 2017, I was coming in for liquidation, I didn’t think that we were coming into stabilizing, because when I came and I saw the amount of work to be done, I thought to myself that it might not be possible and I was going to tell AMCON that’s ok, I think the best way is to liquidate. But after a few town meetings, we saw the commitment of the staff and the zeal at the meeting I had with the senior staff, the passion they had (and still have) and also coupled with the fact that if you liquidate the airline, the country cannot boast of any airline that is more than 50 years. So that is something that I patriotically looked at and I said let us not give it our best, even at the point of dying you will still struggle to make sure you will survive and that also coupled with the fact that the sacrifices to make sure the company survives. The sacrifices are there. Also if you look at AMCON, they said they are going to give us all the support to make sure that we succeed.

So since you came in, what major improvements have you put in place to stabilize this place?

Well the major thing is to improve the maintenance, capability, daily checks for the aircrafts that we have which we call the C-Check. I know that it has been in the news that we do our C-Checks, some people have said that they ‘are over blowing it.’  We have to because this is the first time, a company in Nigeria and in central Africa  for that matter is conducting a serious heavy maintenance check on an aircraft. It is a production, if you go to our hanger, it is a production company, we are taking an aircraft, we are piecing it,  we are doing all the things that are done outside the country, we are doing it right here, we are doing it in Nigeria. Of course under the supervision of supervisory agencies. We did it the first time, we are doing it in the supervision of South Africa, Ethiopia to make sure we were doing it right and we were happy to have done it three times and we are doing for third party, we have done three times, of course the aircraft are flying and we are doing now for third party aircraft and very soon we are going to local companies, they will benefit from local C- checks that we are going to do in the next two weeks.