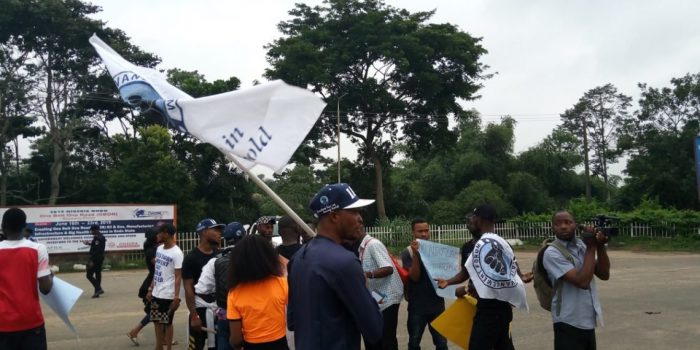 Youths from Ilaje Local Government Area of Ondo State on Monday paralysed activities at the Governor’s office in Akure over alleged poor development of oil producing areas in the state.

The youths, who carried placards with various inscriptions, said they were protesting lack of autonomy for the Ondo State Oil Producing Development Area (OSOPADEC) to enable it implement its mandate of developing the area.

Ojajuni Olaleye, one of the protesting youths, said sea incursion had taken over major parts of Ilaje without government’s attention.

Olaleye also said the law that set up OSOPADEC strictly stated that the commission must be autonomous.

He accused the state government of taking over the administration of the commission.

Daudu Oluwajuwon, another protester, said the action was to ensure financial autonomy for OSOPADEC in order to improve the lives of the people in the area.

But Gbenga Edema, Chairman of OSOPADEC, told newsmen in an interview that the protesters were “sponsored’ by some politicians ahead of 2020 governorship election.”

Edema said no government had been more transparent in the handling of funds and issues that concern OSOPADEC than Gov. Oluwarotimi Akeredolu.

The chairman said the government had cleared the backlogs of bursary owed by the last administration till 2017, with 2018 to be paid this year.

“It is quite funny that somebody will be passing 2017 budget in 2019, at least we have three representatives at the House of Assembly, so I will say they don’t know what they are protesting about.

“This is the first government that will be transparent on the issue of OSOPADEC. They are shouting autonomy, Akeredolu was not the one that created the commission, there is a provision for supervision and control by the governor in the act,” he said.

Edema said current government spent over N240 million every year on bursary for students of the mandate area.

He also said that the current government had spent over N1.9 billion on water treatment, 1.7 billion on water reticulation while pipe laying gulped over N2 billion under the Aboto water scheme.

Edema also said government, through OSOPADEC, embarked on massive construction and rehabilitation of wooden walkways in all the villages to the tune of N500 million.

“It is also not true that the wife of the governor is taking funds from OSOPADEC.

“We only collaborated with her on one of her projects, Bemore, in which over 120 girls participated in the programme and were trained in different capacity building programmes like solar power assemblage, bead making and other things,” he said.

Edema added that no government or agency of the Federal Government could combat sea incursion alone without proper planning and collaboration.