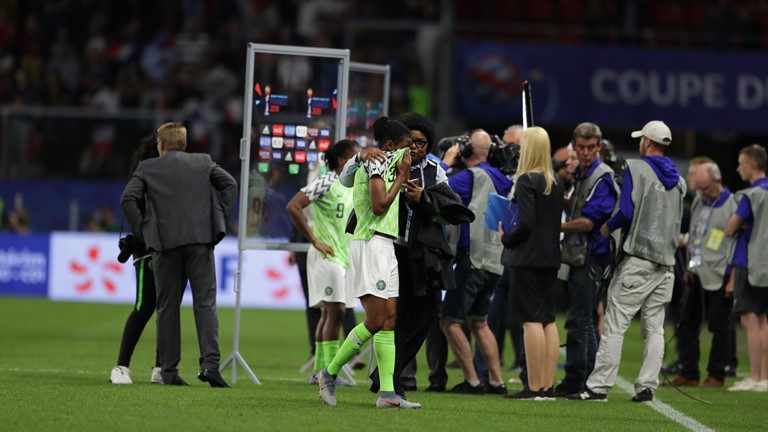 Ngozi Ebere in tears after being sent off. FIFa.com photo

France broke the Super Falcons super defence after converting a penalty awarded when Ngozi Ebere fouled a player in the box to score the only goal of the match in Rennes.

Ebere was booked for the offence, her second and was sent out by referee Melissa Paola Borjas Pastrana. In addition the referee awarded France a penalty.

Wendie Renard stepped in to take the spot kick, but saw it ricochetting out.

Nigerians celebrated that the penalty was missed. But they were bewildered as the referee got instructions from VAR that the goalkeeper, Chiamaka Nnaodzie was not on the line when Renard took the penalty.

Ngozi was booked and Renard given the opportunity to retake it. She didn’t make a mistake this time as she found the right angle of the net.

It was France’s only goal of the match and it was good enough for the three points and leadership of Group A, with nine points.

Shortly after an injured Asisat Oshoala was substituted with Anam Imo and Evelyn Nwabuoku came in to replace Francisca Ordega. Uchenna Kanu also came in for Desire Oparanozie.

The match in Rennes had been stalemated until the foul committed by Ngozi Ebere gave France the advantage.

Norway are second in Group A with seven points and Nigeria third with three points. The South Koreans did not get any point at all. And they had a deficit of minus 7 goals after ending their match with Norway 1-2.

Nigeria still have a chance to proceed to the Group of 16 depending on the outcome of games in the other groups.