MC Oluomo sparks the internet in photo with Georgia Governor 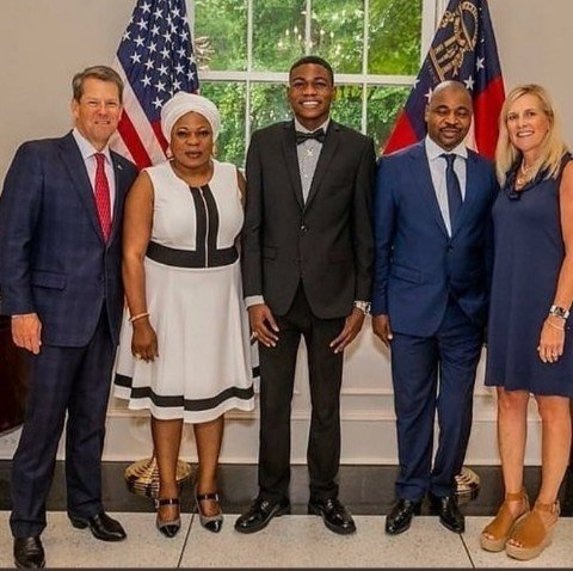 Musiliu Ayinde Akinsanya, better known as MC Oluomo ignited  the social media Tuesday  after he posted his photograph, dressed in a dapper suit, his wife and son, Ololade with Governor Brian Kemp of Georgia, along with his wife Marty.

The photograph marking his son’s graduation and as a valedictorian from the Clayton County Performing Arts Center in Atlanta triggered comments as to why the NURTW chief in Lagos could get access to governor of Georgia. He also got some knocks and derision because of his notoriety in Oshodi.

One of the comments appear to capture the takeaway from the Atlanta photo-op:

“Every parent’s prayer should be May our Children be greater than us, you may also add, be better than us in every sphere. Really pleased MC Oluomo is not grooming his Children to replace him as Generals in the NURTW. Giving them the best education ever. Congratulations!”, wrote Kayode Ogundamisi.

PMNEWS gathered that former Georgia Gov. Zell Miller began the tradition to celebrate valedictorians and their families in 1993.

“This was a once in a lifetime opportunity that truly exemplified the grace and mercy the Lord Jesus Christ has on my family’s life,” Kingsley Owusu Otoo said in a press release.

Valedictorian is an academic title of success used in the United States, Canada, Philippines, and Armenia for the student who delivers the closing or farewell statement at a graduation ceremony. The chosen valedictorian is traditionally the student with the highest ranking among their graduating class. No wonder, MC Oluomo is so proud of his son!

Honorary invitation to me and my lovely son Ololade by the executive governor of Atlanta Georgia USA Brain Kemp and his Marty Kemp. ALHAMDULLIA.

The photograph appears to have been taken a week earlier as MC Oluomo and his son posed with a poster announcing the 2019 Governor’s Valedictorian Reception in Atlanta Georgia.

At my son’s 2019 Governor’s Valedictorian Reception today at Atlanta Georgia.