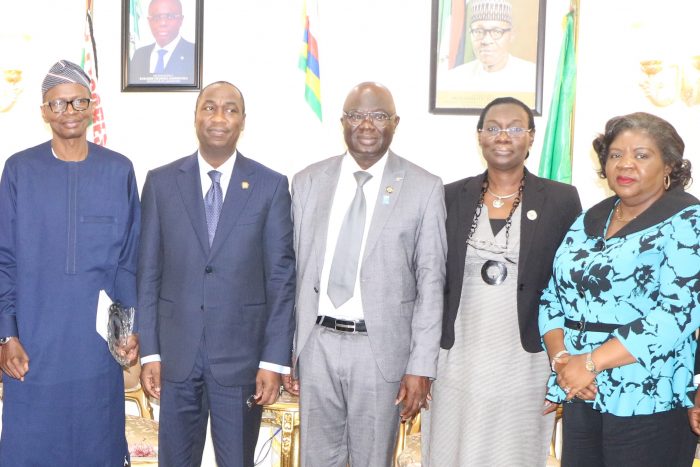 The Lagos State Government has disclosed that it  would  soon give an Executive Order that will compel operators of private primary  schools in the state to give unrestricted access to polio eradication officers to enter their premises  and administer anti-polio vaccines on their wards so as to protect them against the killer disease.

The Deputy Governor, Dr. Obafemi Hamzat said this on Tuesday while receiving the Incident Manager, National Polio Operation Centre, Dr Usman Adamu,  who paid him a courtesy call to reflect on the sudden outbreak of the disease around Makoko, Itire and Maracana Canals in the state and how urgent step must be taken to stop the spread  into other parts of the state.

The deputy governor noted that one of the six pillars of  development strategy of the  present administration was Health and Environment, assuring that the state government in few days would give the Executive Order as recommended by the team of the visiting World Health Organization (WHO).

In addition, he disclosed that the Executive Order when issued would also cover gated streets in every parts of the state, urging all landlords, members  of the various Community Development Associations  to join hands with government by ensuring that gates were opened to allow easy access of polio officers to their streets and administer the vaccines on their children.

He stated that administering vaccines on pupils in public schools alone would not solve the problem as pupils in both private and public schools were products of the same community, as they played and related together after the school hours, urging parents and operators of private primary schools in the state to cooperate with the state government in its efforts at eradicating polio completely from the state.

To ensure that the exercise gets to the grassroots, the deputy governor said all Chairmen of the 57 Local Government Areas would be carried along and enlightened to mobilize their communities for the exercise and educate them on the importance of regular vaccination for the eradication of the disease in our communities.

“Just be very assured of the state government’s commitments to this fight against polio, we are of the opinion that the health sector should get it right and we must ensure that the polio exercise agenda is achieved in the interest of our children”

While briefing the deputy governor on the purpose of the visit, Dr Uthman Adamu  explained that there was an urgent need to give an update on the status of the ongoing polio eradication and routine immunization exercise in the state.

Adamu stated that it was worrisome that Nigeria is one of the three countries in  the world  that had not completely eradicated polio in spite of its consequences on the growing health of the children.

He raised the concerns on the incidences of two cases of polio in Makoko, Itire and Maraccana Canals , stressing that the sudden outbreak in those communities necessitated  the need for the ongoing immunization exercise in the state so as to prevent further outbreak.

While urging government to intensify campaign on the enlightenment of the citizenry on the danger of polio and the need to get children of 0-5 vaccinated against the dreadful disease, he commended the state government for setting up a special Task force on polio eradication chaired by the deputy governor, adding that it was a clear indication that the state government was not playing lip service to the health needs of its citizens.

While expressing happiness that the state government had also approved funds for the next round of immunization in the state, he promised that his team would work assiduously to ensure that the exercise recorded significant success in the state.

Allaying the fears on the implication of a child getting double immunization, the team leader of the WHO Immunization  Nigeria , Dr, Fiona Braka, noted  that the vaccines are boosters and supplement and that there is no health implication if a child gets vaccinated and after two days get another .