How issuing of dud cheque lands businessman in jail 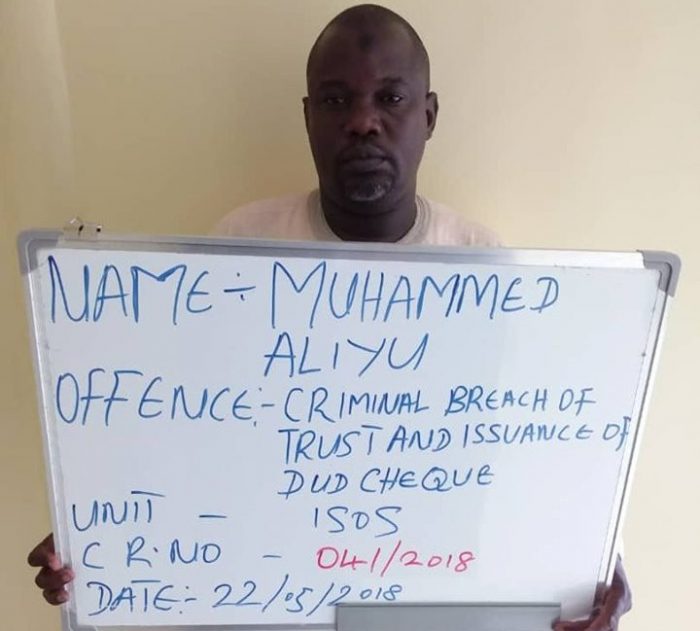 Justice B.M. Shinkafi of the Zamfara State High Court sitting in Gusau, has convicted one Mohammed Aliyu for the offence of issuance of dud cheque, and sentenced him to years in prison.

Aliyu’s trouble began when the Kaduna office of the Economic and Financial Crimes Commission, EFCC, received a petition from one Mohammad Ibn Mohammed of Muhubbul Khairat Global Concept Limited against him.

He alleged that sometime in September 2016, Aliyu deceived him into supplying 40,000 litres of gas, valued at N5,354,000 (Five Million Three Hundred and Fifty-four Thousand Naira).

The complainant further alleged that Aliyu collected a cash sum of N2.5 millon from him to help a friend, making total balance of N7.8 million.

However, Aliyu paid the sum of N1.8 million leaving a balance of over N6 million and when he demanded for his refund, the defendant issued 15 post-dated Zenith Bank cheques, five of which were returned unpaid upon presentation. All effort to get the said money back, proved abortive.

The defendant was arraigned on June 26, 2018 on a five-count amended charge, bordering on criminal breach of trust and issuance of dud cheque.

One of the count reads: “That you, Muhammed Aliyu, sometime in 2017 in Gusau within the Judicial Division of this Honourable Court did obtain credit for yourself from one Muhammad Ibn Muhammed by means of a Zenith Bank cheque dated 31st October, 2017 in the sum of N200,000 (Two Hundred Thousand Naira) only which when presented within the statutory period of three months, was returned on ground that there was no sufficient fund standing in the account for which the cheque was drawn and you thereby committed an offence to Section 1(1)(b) and punishable under Section 1(1)(b)(i) of the dishonoured cheques (Offences) Act,CAP Dii Laws of the Federation of Nigeria, 2004.”

Defendant pleaded “not guilty” to the charge against him.

In the course of the trial, the EFCC through Prosecution Counsel P.C. Onyeneho, presented three witnesses, while the defence presented two witnesses.

Delivering judgment, Justice Shinkafi, held that: “The prosecution has proved beyond reasonable doubt that the accused committed the offence.”

Counsel for Aliyu, P.M. Lasco, urged the court to temper justice with mercy as his client was “a first-time offender and has many dependants”.

The trial judge, thereafter, convicted and sentenced him to two years on each of the five counts.

However the sentences are to run concurrently.

The judge further ordered the convict to pay the sum of N6 million as restitution to the victim.