Lagos prosecutes 13 workers of 7-UP for assaulting LASTMA officials 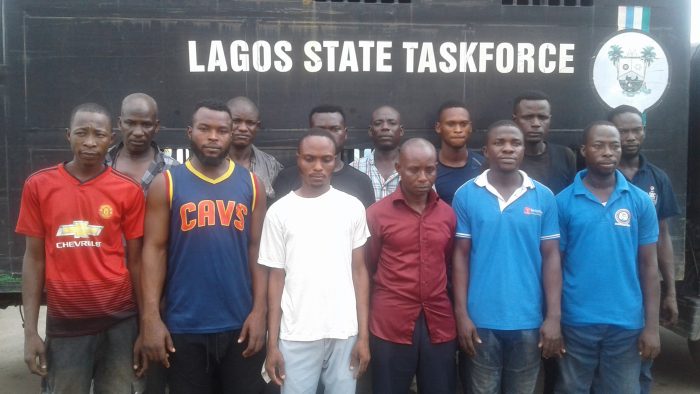 Chairman, Lagos State Task Force, CSP Olayinka Egbeyemi disclosed that the enforcement team of the agency arrested the 13 workers after they assaulted LASTMA Officers and injured three of them.

According to Egbeyemi, investigations revealed that the officers were attacked while trying to tow a truck ( MUS 75 XX) belonging to the company causing serious traffic gridlock.

He said it was an eyesore seeing drivers of ‘Seven-up’ trucks parking illegally on one side of the road, thereby causing serious traffic obstructions to other motorists along toll gate area of the State.

“It was disheartening that officers employed to safeguard members of the public were always being attacked by same people whose interest were being protected,” he said.

According to one of the injured LASTMA officer who was transfered to LASUTH for treatment, Mr. Kazim Abayomi, “most times, drivers and workers of this company always engaged us physically with different weapons while trying to enforce traffic laws on their illegally parked trucks  on the road side.”

Meanwhile, Magistrate Olajuwon Amos of the Lagos State Mobile Court who presided over the case adjourned the commencement of trial to 8th of August, 2019 after they all pleaded ‘not guilty’.

They were all charged for ‘assault’ and ‘conduct likely to cause Breach of Peace’ under ‘Part III, Item 26’ of the Lagos State Traffic Sector Law.