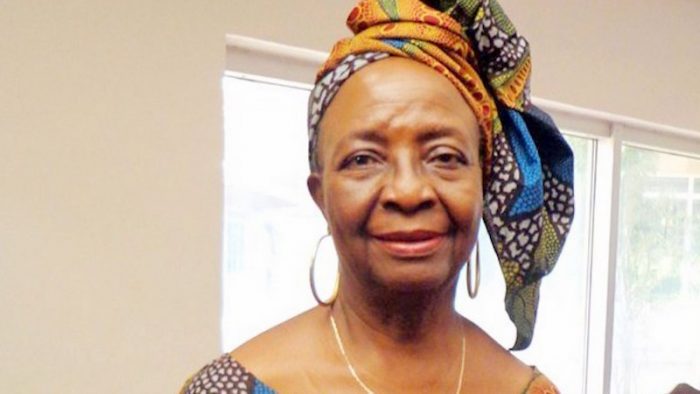 One of the members of the older generation of Nigerian writers, academics and feminists, Professor Molara Ogundipe, died on Tuesday 18 June, in Ijebu-Igbo, Ogun State, Nigeria at the age of 78.

She was born on 27 December 1940 in Lagos. In the early 50s, she was one of the pioneering students of the elite public girls secondary school, Queen’s School in Ede, now in Osun State. At that time, all the teachers were British. The first African to ever teach in the school was Grace Alele, who taught Mathematics and became Grace Alele-William, the Vice-Chancellor of the University of Benin. Because of Alele, Ogundipe got interested in Mathematics even though she was an excellent arts student.

After Queen School, she attended University College, Ibadan, then a college of the University of London, where she made a first class in the Department of English. She was the first woman to do so. For a long time, she taught English and Comparative Literature in several universities in Nigeria, Africa and America with only her first degree. She only got a PhD much later at Leiden University.

It was in her last year at the University College, Ibadan in 1962 that she became a Marxist. This interest blossomed at the Columbia University, New York, where she worked with Lionel Trilling in 1965 as visiting scholar, This was a period pulsating with Flower Movement, Hippie Movement and Black Power.

Her academic and journalistic essays are often rigorous and clarifying. In 1964, she wrote “The Palm Wine Drinkard: A Reassessment of Amos Tutuola.” This essay remains one of the best on Tutuola, the fabulist whose English, strictly speaking, is not English. In the piece, Ogundipe celebrated the women in “The Palm Wine Drinkard.” She would later write on women in the novels of Wole Soyinka, Ngugi wa Thiongo, Festus Iyayi and other writers. Her “Female Writer and Her Commitment” was published in The Guardian in 1983. But, arguably, it was in her essays, “The Rural Woman in Africa” published in 1982; ”Re-creating Ourselves: African Women and Critical Transformations” published in 1994; and “Not Spinning on the Axis of Maleness” published in an anthology, “Sisterhood Is Global” that she really articulated a more illuminating position on women.

She also laced her only collection of poems, “Sew the Old Days and Other Poems” with subtle feminist ideas. In a 1989 special edition of Matatu titled, “Black Women’s Writing: Crossing the Boundaries” edited by Carole Boyce Davies, her 1977 well-informed interview with Paul Marshall, the African-American writer, who was in Nigeria for FESTAC 77, was published. In a very detailed and interesting conversation she had in 1992 with Irene Assiba D’Almeida, titled ”African Literature, Feminism and Social Change” published in Matatu in 2001, she revealed some significant parts of her life’s journeys.

Since her death was announced, some social media commenters have been mistaking her for Mrs Phebean A. Ogundipe, the author of a memoir, “Up-Country Girl”, and renown educationist who co-authored “Practical English” with Tregido. They are two different high-achieving women. The burial rites for Professor Molara Ogundipe, who used to be called Molara Ogundipe-Leslie at a point in her life, will be announced soon by her two daughters and other family members.