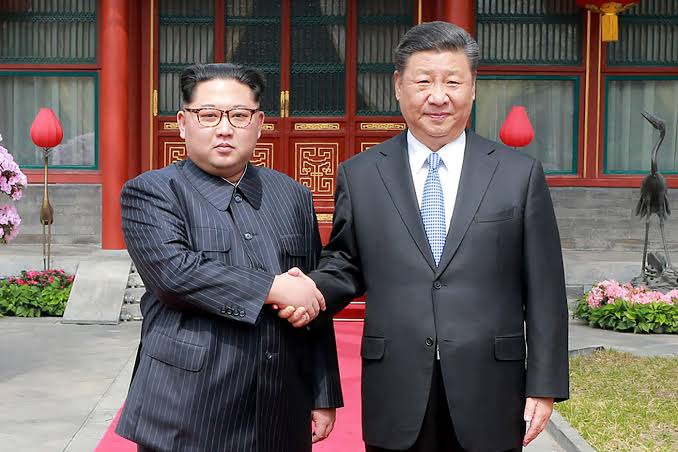 Kim and Xi earlier this year

Ahead of his trade talks with US leader Donald Trump,Chinese President Xi Jinping started a historic visit in Pyongyang on Thursday.

The two day symbolic visit is meant to reboot a troubled alliance. Xi is the first Chinese president to visit North Korea in 14 years, after relations between the Cold War era allies deteriorated over Pyongyang’s nuclear provocations and Beijing’s subsequent backing of UN sanctions.

Xi and Kim have been working to repair ties, with the young North Korean leader visiting his older ally four times in China in the past year and Beijing calling for sanctions to be relaxed.

But the Chinese leader waited to reciprocate the visit, biding his time to see how nuclear talks between Kim and Trump would play out before deciding to travel to Pyongyang, according to analysts.

After Beijing’s own trade negotiations with Washington hit a wall last month, some analysts believe Xi could come back from Pyongyang with leverage for his meeting with Trump at the G20 summit in Japan next week.

“When both China & North Korea are confronted by US, they have a lot to discuss with each other,” Lijian Zhao, the deputy chief of mission of China’s embassy in Pakistan, wrote on Twitter.

He is visiting with his wife Peng Liyuan, Foreign Minister Wang Yi, and other officials, according to Chinese state media.

In Pyongyang, Chinese flags hung throughout the city and residents lined the streets to welcome Xi.

Authorities have imposed tight control on coverage of the visit. International journalists in Pyongyang were told they would not be able to cover it, while foreign media organisations that were initially invited to attend were unable to obtain visas.

The visit will be largely symbolic, with no formal joint communique expected –- as was the case with Kim’s April summit with Russian President Vladimir Putin in Vladivostok, Russia.