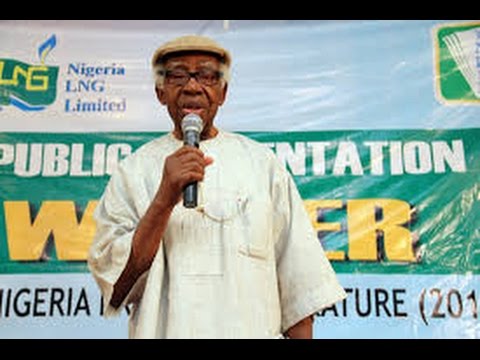 Gabriel Okara, a Nigerian poet and novelist, has often been described as the first Modernist Poet of Anglophone Africa.

Okara, who incorporated African thought, religion, folklore, and imagery into both his verse and prose, had had his works translated into several languages.

The Literati and those who appreciate literature, especially poetry, believe that the “Call of the River Nun’’ was Gabriel Okara’s, most memorable poem.

“……My river’s calling too!
Its ceaseless flow impels
my found’ring canoe down
its inevitable course.
And each dying year
brings near the sea-bird call,
the final call that stills the crested waves
and breaks in two the curtain
of silence of my upturned canoe.

O incomprehensible God!
Shall my pilot be
my inborn stars to that
final call to Thee.
O my river’s complex course?” (Culled from “Call of the River Nun’’)

So, was nostalgic memories and sadness that followed the news of his demise in the early hours of Sunday, March 24, 2019, at his home in Yenegoa, Bayelsa.

He was confirmed dead at the Federal Medical Centre in the Bayelsa capital, Yenegoa; Okara had breathed his last exactly four weeks to his 98th birthday.

Okara, who had also worked as a civil servant, authored “The Call of the River Nun,” as his first poem and it won an award at the Nigerian Festival of Arts in 1953.

His other works included The Fisherman’s Invocation (1978), published two collections of children’s poetry, Little Snake and Little Frog (1992) and An Adventure to Juju Island (1992) and, several other poems featured in the Nigerian literary journal Black Orpheus.

In his poetry, Okara draws from Nigerian folklore and religion while exploring extremes within daily life through circular patterns.

The britannica.com/biography/Gabriel-Okara, commends his first novel, The Voice (1964), as “a remarkable linguistic experiment in which Okara translated directly from the `Ijo’ (Ijaw) language, imposing Ijo syntax onto English in order to give literal expression to African ideas and imagery.’’

Dr Eugene Ibe, representing Government College Umuahia Old Boys Association, spoke to the News Agency of Nigeria (NAN) and also wrote as his tribute on Okara’s life at the Government College and how the experience shaped his later life.

“Every time I met Okara, he never got tired of telling me stories of his life at Umuahia, a school where all students were treated equally no matter whether your father was a fisherman, or a farmer or a politician like Zik.

“Okara took the entrance exams into Govt. College in the year 1934 from Kaiama and went to Umuahia for interviews.

“In 1934, there were no speed boats but dugout canoes; roads rarely existed but the Port Harcourt to Umuahia to Enugu rail line was operating mainly for carrying coal from Enugu to Port Harcourt (PH).

“The poor boy had to travel in a paddled dugout canoe to Onitsha and then go by road from Onitsha to Umuahia, a three-day journey.’’

According to Ibe, Okara said he was interviewed by Rev. Robert Fisher, the Founder and Principal of Government College, Umuahia in 1934.

“He must have done extremely well to be awarded a full scholarship (for the best five entrants) to study at the college which he entered in January 1935.

“As a `fresher’, he was immediately pounced upon by the Class II boys who tried to `show him pepper’.

“When he ran to a teacher from Nembe, Mr W. E. Alagoa, he refused to protect him, especially as he spoke in Ijaw vernacular, a punishable offence in Umuahia.

He was so miserable that he felt like returning to his parents Samson and Martha Okara, but when he remembered the three-day journey he opted to endure and eventually adjusted.

However, he was liked by his juniors like Late Dr Melford Douglas, Late Dr J.O.J. Okezie, Federal Minister of Agriculture, late Justice Charles Daddy Onyeama of the International Court at The Hague.

“Okara was good in sports being lanky and tall; he specialised in long distances.’’

On Okara’s experiences in class, he said: “He was taught mainly by Europeans, including Fisher, A.J. Carpenter, the author of West African Nature Study and a few Nigerians like Mr W.E. Alagoa and Mr Jumbo.

“His interest in Arts and Humanities was encouraged by the English teachers.

“Little did he know that by beating Mbanugo in English, Mbanugo, who maintained the first position in class all through, he was setting the stage for conquering the world with his poetry.

“His friendship during his student days lasted him a life time and he achieved ever so much from 1940 when he left Umuahia, till his working days in the Government of Eastern Nigeria.

“He rose and was at his zenith when the Nigeria/Biafra war started; he went on diplomatic missions with famous novelist Chinua Achebe, seeking recognition for embattled Biafra.

“Okara’s devotion to `Umuahia’ – Govt. College, was undeniable; I still have the postdated cheque he issued at a ripe age of 95 years for the renovation of his alma mater,’’ Ibe said.

On the private life of this great literary icon, his nephew, Emmanuel Okara told NAN that the poet was jovial in his own way, an “English gentleman’’ and a lover of tradition as well as Christian Science.

According to him, he also played the piano very well.

“Uncle Gabriel was such a delight to be with and he would usually regale you with anecdotes and rib cracking jokes, some of which I am chuckling at as I am writing this tribute.

“ Uncle loved his tea; not just any tea; quality tea like `Earl Grey’ or `PG Tips’, I remember how once when he was a guest in my house in Lagos en route the United States of America, he asked for tea and I brought a mug alongside the stuffs for him to have his tea.

“Uncle pointedly told me that tea was usually taken in a proper tea cup and a saucer which because of the size retained the same temperature to the end, unlike the mug where the tea got cold before you are through with it.

“And the next time he asked for tea; I duly complied with the full paraphernalia that goes with tea drinking.’’

According to Okara’s nephew, Uncle Gabriel was also an accomplished pianist, and he would usually serenade us with melodious classical tunes.

“Uncle was such a gentleman and I only saw him lose his temper once, to the extent that he chased an equally elder relation of ours with his walking stick after the relation had annoyed him. (Don’t ask me who; because I won’t tell).

“Uncle was such a devoted member of the Christian Science denomination and he gave my wife and I some of their literature to read, and had lengthy discussions or sermonisation on the virtues of Christian Science.

“Like all mortals, Uncle Gabriel departed eventually these shores for the great beyond on March 24, on the eve of my birthday; he will without any iota of doubt be missed by us all.

“Uncle lived a fulfilled life and left his INDELIBLE mark on the sands of Time.

“During his sojourn on these shores he made his mark in civil service and the literary world through his monumental works like: “The Voice’’ (a novel), “The Call of River Nun’’, “The Fisherman’s Invocation’’ (poems) and other great works that are too numerous to remember.’’

So notable was Okara that President Muhammadu Buhari in his condolence message extolled the “great story-teller whose powerful use of imagery and symbolism in his literary writings helped the world to appreciate and understand the richness, complexities and uniqueness of the African heritage and culture.’’

The president believed that Okara, who was deservedly known as the “founder of Modern African literature’’ would be fondly remembered for his immense contributions to the development of African literature, drawing on experience from his native Ijaw language.

Similarly, the Bayelsa Governor, Mr Seriake Dickson described Okara’s demise as a great loss to the state and Nigeria; he commended the late Okara’s contribution to educational policies of the Bayelsa, especially his administration.

He said that the late Okara would be greatly missed by all lovers of literature and intellectualism, especially the young and up and coming writers.

A former Governor of Bayelsa, Chief Timipre Sylva, said that as a keen fan, admirer and friend of Gabriel Okara, he studied the poems of the Nigerian Negritudist (As termed by literary scholars) in his undergraduate years and beyond.

“Particular is the poem `Call of The River Nun’ which is one of the most aesthetic and philosophical portrayal of the complex, but natural relation of life and death.

“Piano On Drums’’, on the other hand, like it must have been for millions around the world, was an artistic guide in navigating the maze of culture shock at various points of earlier years.

“A colossus has passed, but not without leaving prints on the sands of time and setting standards for literary and intellectual excellence.

“Okara’s passing is not one to mourn, it is for celebration and for pride and for the marking of a platinum point in cultural mileage,’’ he said.

Jumoke Verrissimo, a poet and author of “I am Memory’’, said Okara’s works greatly influenced many writers, especially those who were interested in evoking the folklores, music and religion in their poetry.

The Association of Nigerian Authors (ANA), Bayelsa State Chapter, through its Chairman, Mrs Bina Ilagha, said the association was saddened by the news of his passing on.

“The Association is ruffled by the news because it came at a time when preparations are in top gear to celebrate his masterpiece, `The Voice’ at 55.

“We are saddened by the news but are consoled that he left behind lofty legacies; Pa Okara, through his literary exploits put Bayelsa in the map of literary excellence.’’

The Acting Managing Director of the Niger Delta Development Commission (NDDC), Prof. Nelson Brambaifa, described the late Gabriel Okara as a deity of African literature whose voice could not be stilled.

According to Brambaifa, Okara’s accomplishments have ensured that his name will never be forgotten.

For James Tar Tsaaior, a Professor of Media and Cultural Communications, and Alexander von Humboldt Experienced Research Fellow at the University of Potsdam, Germany, Okara is a patriarch of Nigerian/African literature.

“I met Pa Gabriel Okara only once, in Port Harcourt in 2004, during the birthday celebration of another writer.

“During our Port Harcourt meeting, I found him a decent, personable and collected man whose presence was contagious and reassuring.

“Indeed, he infected me with his artful smiles and noble carriage.

“One thing peaked significantly for me; this accomplished and celebrated writer was truly easy-going and constructed a horizontal relationship, not a vertical one with others around him.

“ It was for that reason that I took a picture with him. That picture has today survived him and a memorabilia which I will continue to cherish,’’ he told NAN.

On his works, Tsaaior said: “Later on, I was to read his powerfully encoded novel, The Voice; I found it a supremely resonant literary offering, rich in vernacular traditions.

“The peculiarity of the idiom Okara mobilised in moulding the integral universe of the novel foregrounded his rearing and rootedness in Ijaw cultural traditions and cosmologies.

“He remains a gadfly, a beacon and touch-bearer whose towering achievements will continue to announce him to the whole world.

“ He will continue to live in our hearts as the noble and illustrious citizen of the republic of letters.

“When the mother mushroom yields to the elements and dies, an heir in a new mushroom germinates in its place to continue its progeny.

“Okara still lives on. His voice is still alive and accented and will travel and reverberate beyond the Delta creeks mangroves and estuaries to the boulevards of the world,’’ Tsaaior told NAN.