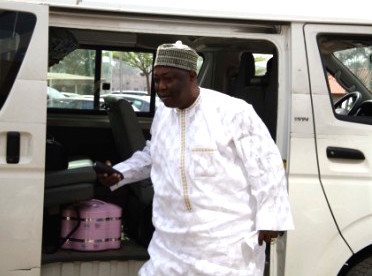 The trial of former director in the Police Pension Office, Esai Dangabar and others for alleged N14 billion pension fraud could not continue on Thursday before Justice Hussein Baba Yusuf of the Federal High Court, sitting in Maitama, Abuja due to his absence.

Dangabar and others are facing prosecution by the Economic and Financial Crimes Commission, EFCC on amended 20-count charge, bordering on criminal breach of trust and fraud.

During proceedings, the lead defence counsel, represented by Ugiabe Kelvin, apologised that the first defendant, Dangabar was still sick and not available in court. He disclosed that the prosecution as well as doctors did everything they could to make him available today in court, but to no avail.

Kelvin presented to the court Dangabar’s hospital report, which showed that he is hypertensive, diabetic and and needed more time to spend in the hospital. “We shall be asking for a short adjournment to enable us continue with the trial,” he said.

The prosecuting counsel, A. O. Atolagbe, who did not oppose the defence team’s motion for adjournment, described Dangabar’s medical report as unfortunate, noting that the trial has been stalled three times in a row on account of the first defendant’s bad health condition.

“My Lord, I have seen the letter in respect of the first defendant. It’s quite unfortunate. This is the third time in a row that this will be happening. My witness is in court and he is not a staff of the EFCC. He came all the way from Lagos; nevertheless, I will not be opposing the adjournment. We pray that the defendant will recover and be able to stand his trial,” Atolagbe said.

Both the prosecution and defence conferred and agreed on October 17, 2019 adjournment date.

In making his pronouncement, Justice Yusuf concurred with the suggested date of adjournment, saying “I have listened to the reactions of the counsels in respect of the first defendant’s medical report. He is on admission in the hospital. I hereby adjourn this case to 17th October, 2019.”