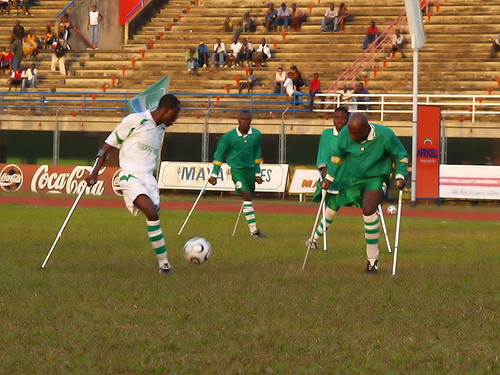 Sulaiman in Lagos on Friday that 22 footballers out of four teams that took part in the trials were picked by technical officials at the two-day event.

He said that the measure became necessary as Nigeria would participate in the 5th Cup of Africa Nation for Amputee Football (CANAF) billed for Angola in September.

“We had to dissolve the national team as a way to curb recycling of same set of amputee footballers in international tournament, while we create opening for others to exhibit their skill.

“It was on that note that the open national trials were held which enabled technical officials to identify 22 footballers, out of which a brand new national team will be formed.

“It was a competitive event because the footballers exhibited good skills in their wings during the trials, but it ended well and we were able to hit our target,” Sulaiman said.

The Amputee boss said that necessary arrangements were in progress to invite the selected footballers to national camp between July and August where the final screening would be conducted.

He urged the footballers to keep the training zeal on, saying that the selection would be restricted to players that stood out in their wings, team spirit and exhibited discipline.

“The next step is to invite the players to camp where the final trials and selection will be made,” he said.

Nigeria and other countries would take part in the Federation Africa for Amputee Football (FAAF) organised 5th CANAF tournament billed scheduled for September in Angola.