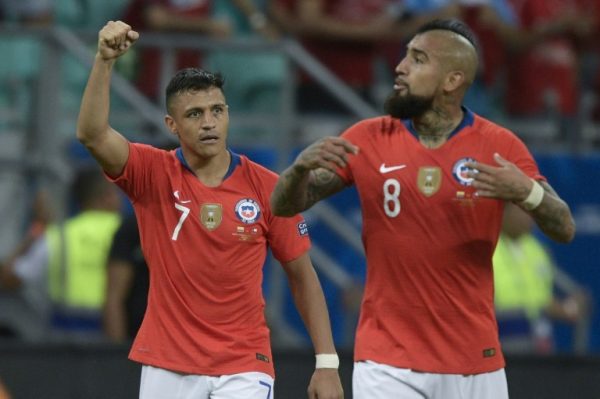 Alexis Sanchez put a miserable club season with Manchester United behind him as he sent Chile into the Copa America quarter-finals with the winning goal in Friday’s 2-1 win over Ecuador.

Jose Fuenzalida gave Chile an eighth-minute lead but Enner Valencia equalized for Ecuador from the spot.

Sanchez bagged the winner but Chile finished with 10 men after Gabriel Achilier’s red card a minute from time.

The 30-year-old Sanchez started only nine Premier League matches, scoring just once, in an injury-interrupted season for the Red Devils in which he struggled to make an impact when he did play.

But he scored for the second game running in Salvador as Chile joined Colombia as the only teams to qualify for the knock-out stages after their first two games.

Chile top Group C with a perfect six points ahead of their clash with Uruguay at Rio’s iconic Maracana on Monday.

Ecuador are left staring elimination in the face after a second straight defeat, knowing they must beat Japan in Belo Horizonte on Monday to stand any chance of progressing.

Chile began as they had left off in their 4-0 thrashing of Japan last Monday, opening the scoring after just eight minutes.