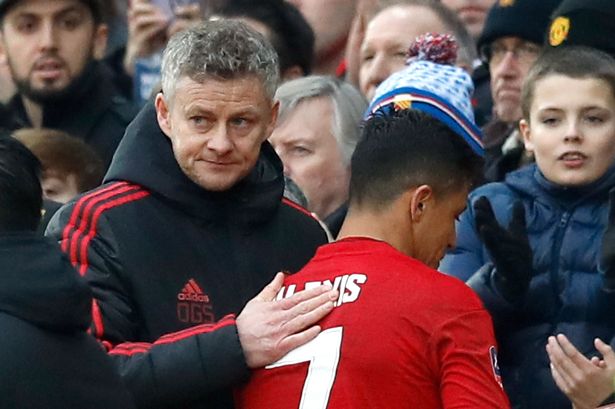 And he immediately called on Ole Gunnar Solskjaer to give him a chance to lead Manchester United’s attack next season.

Sanchez, 30, has flopped since arriving at Old Trafford from Arsenal 18 months ago.

The ex-Barcelona and Arsenal star arrived at this summer’s Copa America with his reputation in tatters after scoring just two goals in all competitions for under-performing United.

The £500k-a-week Chilean has also increasingly struggled with injuries, amid suggestions that the best days are firmly behind a player with over 700 professional games under his belt already.

And United are keen to sell, but are finding it a struggle to entice interest due to the player’s huge wages.

Sanchez arrived in Brazil with the back-to-back South American champions and has scored in both matches, as La Roja have booked themselves a quarter-final spot.

And speaking after the game in Bahia, Sanchez made his plea to Solskjaer.

“I have always had the enthusiasm to play but in England I’ve been given few opportunities lately,” Sanchez said.

“But I’m relaxed. Representing your country is the most beautiful thing there is.”

His coach, Reinaldo Rueda, insists Sanchez looks more like his old self because of his closeness with his international colleagues, and says regular action is necessary for his country’s highest-ever goalscorer.

“It’s not easy to explain, but Alexis has come here and shown a lot of commitment and perhaps in Manchester he does not have the emotional bond he has with his team mates here, that affection.

“He’s had bad fortune because Manchester United have had problems for a while, so he does not have the structure he has here. He has also had injuries, he’s lacked consistency, he has lacked continuity.

“We have done brilliant work with him, we have given him a lot of warmth, which is what he needs. He has a special connection with the team and the group is very fond of him.”

Sanchez also revealed he played the second half with an ankle injury picked up in the first period.

“After a cross I rolled my ankle but I put a bandage on it, I took a pill for the pain and I came out again,” he said.

“I think I have a sprain, I was playing with pain but I hope it’s not too serious.

“I’m happy for the team and how things are going. When I play for my country, I’m always playing happy.

“It was a tough game today, and we move onto the next one.”