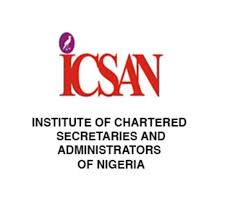 Institute of Chartered Secretaries and Administrators of Nigeria (ICSAN)

The Institute of Chartered Secretaries and Administrators of Nigeria (ICSAN), has urged Small and Medium Enterprises (SMEs) to imbibe principles of good corporate governance to achieve sustainability and succession planning.

Mr Samuel Kolawole, its 26th President, made the plea at a press briefing in Lagos.

Kolawole said the plea was pertinent to enable SMEs to attain longevity and increase their contributions to the Gross Domestic Product (GDP) of the Nigerian economy.

He said business and organisational success could be short-lived, if they were not based on corporate governance principles and values.

”The nation at large will benefit from the successes of organisations across private and public sectors via the application of good corporate governance structures.

”Our members across the public-private sector domains can help promote principles of corporate governance which will help organisations and the economy at large to grow,” Kolawole said.

He said that application of good corporate governance principles would help address issues of bottlenecks to ensure the promotion of the ease of doing businesses within the country.

”The application of culture of transparency and accountability can help improve the nation’s ranking in the ease of doing business terrain across the world,” Kolawole said.

He advised SMEs to be actively involved by building up the culture of activities involving the Corporate Social Responsibility (CSR) at their early stage to influence the society where they operate.

This, he said, could be achieved within the limit of the profit made by such business.

”CSR is part of good governance, and we, at our different levels, do things to give back to the society.

”I advise that within the limit of the profit you make as an organisation, you do your own bit and be better for it,” he said.

The institute president urged his members to adopt the application of the principles of fairness and transparency in addressing the interests of every stakeholder to ensure sustainability of both the public and private organisations.

He also implored members to be abreast of the principles and regulations guiding the activities of both public and private sector to protect interest of the minority shareholders.

Kolawole said in doing that they should ensure the rights of majority stakeholders were not infringed upon.

According to him, the interest of everyone in the chain of an organisation inclusive of management, customers, suppliers and staff must be considered.

The outgoing president listed as his achievements activities aimed at improving the visibility status of the institute via a weekly radio programme called “Corporate Governance Platform” and the beautification of the institute’s secretariat.

He added that the institute under him “strove to enrich the knowledge” of the general public through educational initiatives such as linkage programmes with some universities and the publication of books and journals for greater professional edge.

Kolawole, however, hoped that in the next 10 years, the institute would maintain its place as fore runners in the propagation of good corporate governance, both locally and internationally.

He reiterated the institute’s commitment to supporting industrialisation and diversification by promoting principles of corporate governance and advocacies that support the ease of doing businesses.