Osinbajo in Lagos: What we will do to end Apapa traffic nuisance 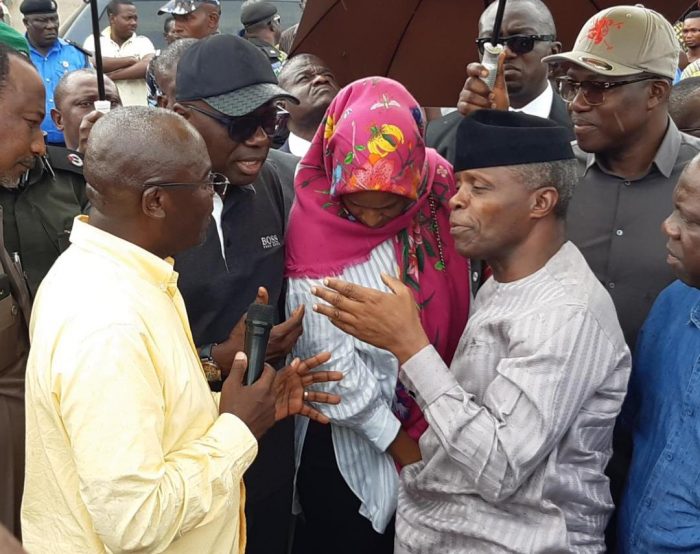 Osinbajo with Sanwo-Olu and others during the inspection

Nigeria’s Vice President, Prof. Yemi Osinbajo was in Lagos on Saturday and spoke on what the Federal Government will do to end the Apapa traffic nuisance.
Osinbajo, who visited Apapa to inspect the level of work done so far on the Lilipond Transit Truck Park, in company of the Lagos State Governor, Babajide Sanwo-Olu, said the government was committed to building more ports across the country to decongest the gridlock in and out of the Apapa ports.
He said the other thing that needed to be done was the clearing of the trailers and tankers off the road so that there could be easy access to the port, noting that there had been considerable improvement within the axis.
“The Mile 2 end is the axis where we think that there is difficulties. But we think that in the next couple of days, it will be resolved, especially with the opening of the Tin Can Island trailer parks and the palliative work that is ongoing all the way to Mile 2, which Hi-tech is handling and we should be able to resolve that congestion at the Mile 2 end,” he stated.
Osinbajo said that the entry route to the port had been cleared, and that there was the need to understand that there were short term and mid to long term solutions.
“One of the mid-to-long term measures is to decongest the cargo Traffic coming into the port. We need to understand that this is a port that was designed to take 34 million metric tonnes daily but is currently taking over 80. With this, it is obvious that there is need to find alternative quickly.
“And to expand, where that is possible, of course, the Lekki Port is an ongoing project which will be a great help when completed because it will support the Apapa and Tin Can Ports. Also, we are dredging the Warri Port which are aimed towards decongesting the traffic into an out of the Apapa and Tin Can Ports,” he added.

According to him, “the Lagos-Kano rail is also starting from the Apapa ports. So, we expect that we should be able to get cargo out of the Apapa Port using the rail than to take cargo out of the port using the hinterlands and some are using badges at the moment. So, I can tell you that there are different approaches towards getting better movement in and out of Apapa.

“This is a very busy port which was signed post by the fact that the country is a very busy place for commerce. So, traffic is bound to increase and we think that we will be ahead of the issues that could further arise with the way we are going.”
The Vice President said the most important thing to understand was that the Apapa congestion was caused by the problem of space, saying that the way to sustain the level of improvement already achieved was to address those major concerns.