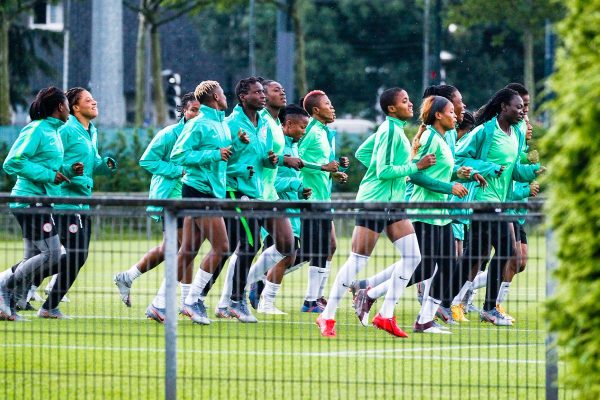 Nigeria’s Super Falcons will line up today at the Stade des Alpes, Grenoble in France to face two time World Cup champions Germany. The kick-off shall be 16.30 Nigerian time.

Here are some points to know:

Germany topped Group B with three wins, Nigeria in Group A came through in final third-placed slot. It was their first time in 20 years.

While Nigeria are ranked 38th in the World, Germany are ranked No.2, just behind USA.

The last Women’s World Cup meeting between these sides was in 2011, when then hosts Germany won 1-0 thanks to Simone Laudehr’s second-half goal.

Alexandra Popp is the only surviving Germany player.

If she plays against Nigeria, Alexandra Popp will win her 100th cap for the national team. The Wolfsburg forward made her debut for the side in 2010 and is competing at her third Women’s World Cup.

On paper, the Super Falcons have an Everest to climb to defeat Germany, but then they were able to hold at the group stage 4th ranked team, France until the 75th minute when France earned a controversial penalty.

“This is what we are here for. We are really happy qualifying for the next stage,” said Super Falcons veteran Onomi Ebi. She had featured at five FIFA Women’s World Cups and is set to play against Germany.

Thirteen of the 16 teams which have qualified for the knockout rounds were also present at this stage at Canada 2015. Nigeria are one of the newcomers, along with Italy and Spain. The trio replace Colombia, Switzerland and Korea Republic in the only changes from four years ago.

“I think the Nigerian team is definitely so much better than the ranking. Everyone can see from our performances that we are not acting like a team ranked 38,” said coach Thomas Dennerby.