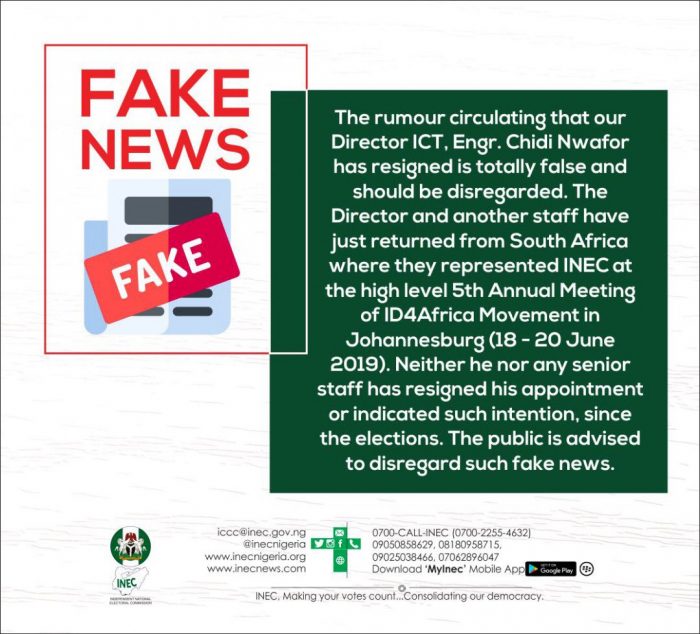 The server of the Independent National Electoral Commission has refused to quit the headlines.The latest was the rumour about the resignation of Engr. Chidi Nwafor, INEC’s director of ICT, the man who should know about the server, whether real or phantom.

“The rumour circulating that our Director ICT, Engr. Chidi Nwafor has resigned is totally false and should be disregarded. The Director and another staff have just returned from South Africa where they represented INEC at the high level 5th Annual Meeting of ID4Africa Movement in Johannesburg (18 – 20 June 2019). Neither he nor any senior staff has resigned his appointment or indicated such intention, since the elections”, the electoral umpire stated in one of the tweets.

In a second tweet, INEC issued a PDF version of the disclaimer and then pinned it as fake news in a third tweet.

It was quite understandable why INEC embarked on a rapid response to kill the false news.

The existence of the server is the main plank of the election petition by the opposition presidential candidate, Atiku Abubakar.

He claimed that an INEC server gave him more votes than the one apportioned to him live on TV by INEC.

INEC said that the results of the election were collated manually and it didn’t use any server.

But the opposition has insisted that the server exists. In Yola, Adamawa state two groups, linked with Atiku Abubakar, stretched the existence of the server.

The groups, Deservation and Pukka Initiative, said they have a document, that detailed how and when INEC server was allegedly installed and put to use in all the 36 states.

In South Africa, Nwafor spoke to a filled hall, where he said that for Nigeria’s voting process to be reliable the #INEC @inecnigeria database must be harmonised with the @nimc_ng database.NIMC is in charge of national ID card.