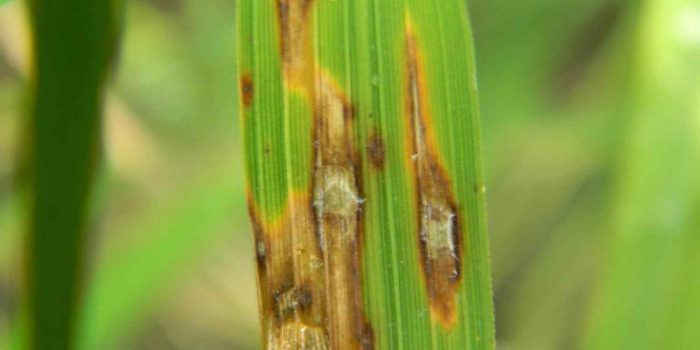 A rice disease suspected to be Rice Blast has ravaged farmlands in Ayaya near Adabda in Gamawa Local Government Area of Bauchi State.

The District Head of Gamawa, Alhaji Adamu Abdulkadir Dahuwa, said this at his palace on Saturday in Gamawa during an interview with the News Agency of Nigeria (NAN).

Dahuwa, who is also a victim, said the disease, noticed in the area in the last three weeks, had destroyed about 20 hectares of rice farms, parts of 2018/2019 dry season farming.

“The invasion of the disease suspected by experts as destructive fungal infestation has wreaked havoc, infesting about 20 hectares of rice farms across the area.

“I detected the disease in my farm in late May when the crops were reaping and when the good dry season we experienced in the area raised hopes of decent harvest.

“It is very difficult to assess the extent of damage to yields as the crops are at varying stages of growth,” he stressed.

“This is an alien pest because we have never recorded such pests in the last four years we have been carrying out irrigated (dry season) farming in the affected areas.

“We were not able to report the invasion to government officials but I am making it public now since I have spotted an official from the Bauchi State Agricultural Development Authority (BSADP) who is here on condolence visit..

“I know he will carry the news to BSADP that, most of the times, is responsible for pests control in the state,” the district head said.

He, therefore, called on appropriate authorities to come to their assistance to avoid future occurrence.

Accoding to NAN, efforts made to obtain official side of the story from the Programme Manager, BSADP, Dr Illiyasu Gital, proved abortive as he was said not to be on seat.

The official who claimed that he had visited the affected areas on different assignments, confirmed that significant hectares of farms were affected.

“The disease is much more damaging to rice and it is harder to detect and eradicate because it has a dispersal capacity of over 2,000km per annum.

“It might occure due to combination of ecological and climatic factors such as weather patterns, mono cropping, introduction of new species and pests migration,” he added.

Also contributing, the Director, Federal Ministry of Agriculture, in charge of Bauchi, Alhaji Mohammed Yusuf, said the disease was first identified in the state over 20 years ago.

“It was so prevalent then that the Japanese government assisted farmers in the state with agrochemicals including Topsin-M which was very effective.

“I am surprised that the disease has decided to stage a come back because for long we have not heard of it.

“But it can be eradicated through spraying of agrochemicals such as Capriduo, Topsin-M and seeds dressing,” Yusuf explained.