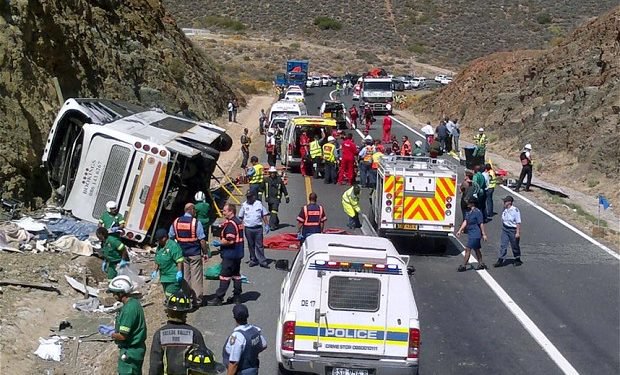 The Police Command in Abia has confirmed the arrest of a driver whose vehicle crushed a woman and her son to death on Friday evening in Aba.

The Police Public Relations Officer in the state, SP Geoffrey Ogbonna said the driver was taken into custody and his vehicle impounded after the tragic incident which occurred near Immaculate Junction bus stop.

He said that the victims identified as Mrs Blessing Kenneth, 40, and her two year old son, Success Kenneth were crushed to death by a Mercedes Benz Truck with registration number: ABU 832XK, at about 6 pm Friday evening.

An eyewitness disclosed that the pregnant woman and her son whom she held by the hand were crossing the dual carriage way when she suddenly fell down and the truck ran over them.

The witness, who spoke in anonymity, said the accident occurred at the ever busy Immaculate Junction, very close to the popular Umungasi Market, along Aba-Owerri road in Aba.

She said that the impact of the truck’s tyre on the woman’s head blew up her skull and that of her son leaving both dead beyond recognition at the spot.

Another eyewitness, Ufomba John described the incident as worst thing he had seen in his entire life.

“She actually slipped. I do not know what pushed her, but everyone is saying that something must have caused her to slip and fall before the approaching truck crushed them.

“The most painful thing is that apart from the boy with her, I learnt she was also pregnant. To be frank I do not know how I can recover from this shock,” he said.

The PPRO said the bodies of the woman and her son had been deposited in the mortuary while efforts are being made to trace her relatives.