How forces of darkness invaded Rivers during governorship poll - Wike 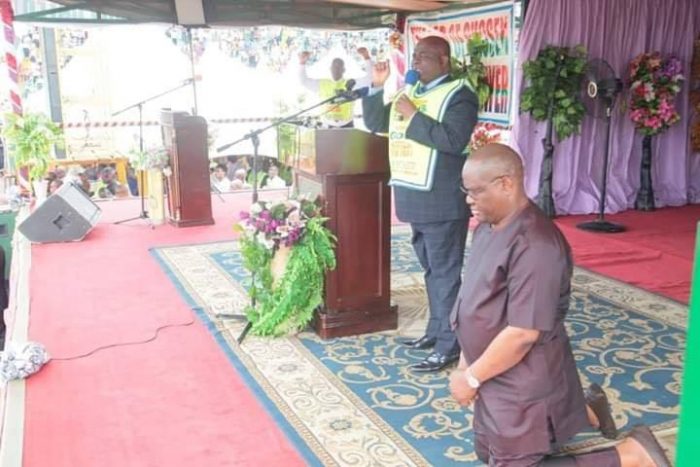 Wike kneeling on the altar

Rivers State Governor, Nyesom Ezenwo Wike has said that forces of darkness invaded the state and attempted to rob the mandate of the people, but that God stood firm for him.

He said his administration would continue to partner with the church for the development of the State.

Speaking on Sunday during the Lord’s Chosen Crusade with the theme: “God has the power to do this or that” at the Yakubu Gowon Stadium in Port Harcourt, Wike attributed his political survival to the support and prayers of the Christian community.

“We saw forces, but the greater force, God Almighty came. With this crusade. Rivers State will be abundantly blessed. I repeat once again without apologies, Rivers State is a Christian State. That is why nobody can touch us. When it mattered most, the Christian community prayed and God heard your prayers.

“I will continue to support the activities of all Churches. This Government will always partner with the churches , whatever the programme they are engaged in. I urge the Church to continue to pray. Each time you pray, put us in your prayers”, he said.

He said that God prevailed in Rivers State on March 9, 2019 and took charge of the state.

“On March 9, 2019 light prevailed over darkness. God showed himself and he is in charge. But for God, I wouldn’t have been here addressing the Christian faithful.

He prayed for the mighty hand of God to rest on Wike with Divine protection and continuous victory all the way.

The Cleric prayed for Wike, his cabinet, the State Assembly and Local Government Council Chairmen. He said God will continue to lift Rivers State to greater heights.

The crusade attracted members of the Church from the 23 Local Government Areas of the state.