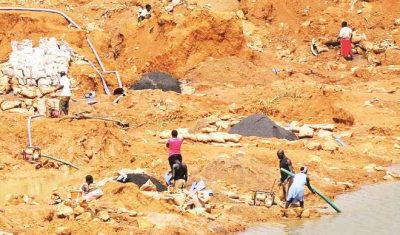 Mr Obadiah Nkom, the Director-General Nigeria Mining Cadastre Office (MCO), says the country is in historic times as it is on a mission of self-rediscovery and redemption.

He said this during his investiture as president of the Nigeria Mining and Geosciences Society (NMGS) on Saturday in Abuja.

The News Agency of Nigeria (NAN) reports that he was elected as the society’s 30th president in March, at its 55th Annal International Conference in Enugu.

Nkom recalled that the country prior to the discovery of oil and gas in commercial quantity was known for its tin, columbite, and coal.

“Mining was one of main-stay of the country’s economy, leading to the establishment and development of cities such as Jos and Enugu where generations were raised.

“Mines and mining camps were homes to people from diverse corners of this country, guarantying the earning of decent living wages,” he said.

This, the NMGS President said promoted cohesive family lives and above all cemented the bond among the people.

Nkom said such days were only now remembered with nostalgia, especially so, because many of the mining entities had long been consigned to the dustbin of history.

He, however, said that efforts were being made by some Nigerians to get the country back to those “winning ways again”, a reason he said the country was on a mission of self-rediscovery and redemption.

The director-general assured Nigerians that as the President Muhammadu Buhari-led administration enters the next level of development, the NMGS would continue to work closely and harmoniously with government and its agencies to achieve its objectives.

He noted that jobs in the oil and gas sector were becoming endangered as the world was aggressively looking for alternatives to fossil fuels.

Nkom advised that the Nigerian oil and gas sector should therefore, as a matter of fact begin to also pursue the maximisation of the potential inherent in the sector.