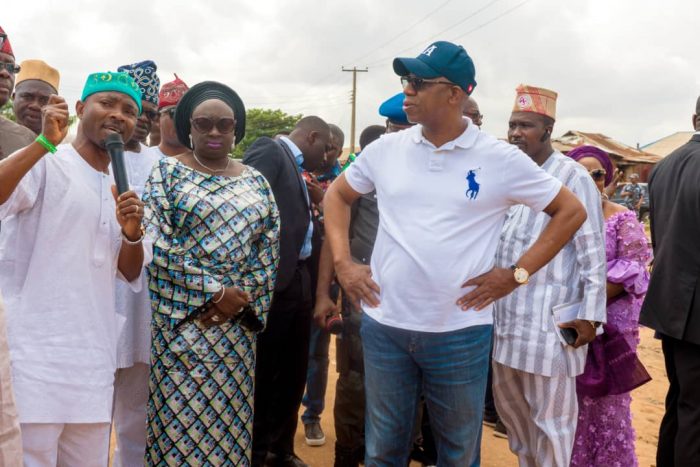 Ogun State Governor, Prince Dapo Abiodun has assured the people of Ota, in Ado-Odo Ota Local Government Area that roads within the local government connecting the state with neighbouring states would be repaired to make room for connectivity and mobility within and outside the state.

Governor Abiodun who made this known while inspecting some roads in the local government that share close proximity with Lagos, said that the visit was in line with the campaign promises he made to lay emphasis on rural and township roads.

He added that his administration was determined to make it easy for people to move with relative ease between Lagos and Ogun State.

“We appreciate the fact that one of the biggest advantages that we have is that we are able to provide services for neighbouring states, particularly Lagos state. A lot of people want to live in Ogun and work in Lagos and we promised that we are going to ensure that we do that so that our people can move between Lagos and Ogun with relative ease.

“So for us, connectivity and mobility is very important. We are starting with the connecting roads that connect us with Lagos state, and we have seen three of those critical roads,” he said.

The governor promised that his administration would begin the process of ensuring that the Department of Public Works starts work on the roads.

On the incessant accidents at the toll gate, Ilo-Awela road, the governor said that speed breakers would be installed on the roads to slow down vehicles. He warned car owners who park along the road to desist from the act.

Governor Abiodun called on the Permanent Secretary of the Ministry of Works and Infrastructure to include in his plan provisions for market, bus stops and speed breakers so that the road would be wide enough to accommodate the traffic and also help reduce accidents on the road.

Some of the roads visited include Ikola, Navy, Itele, Ikoro-Otun, Toll-gate and Ilo- Awela roads.