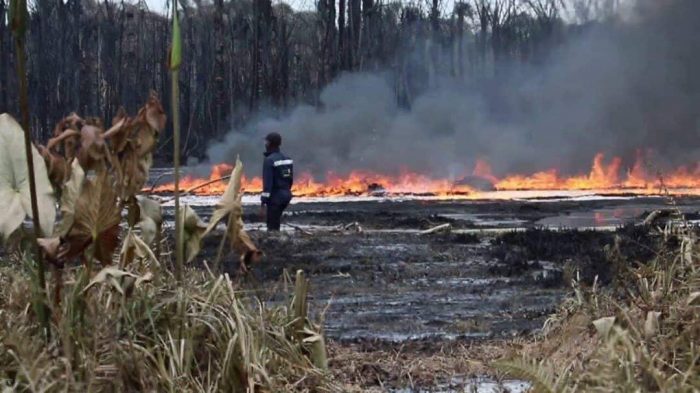 Scene of the fire

Residents of Kom Kom in Oyigbo Local Government Area of Rivers State where an oil pipeline belonging to the Nigerian National Petroleum Corporation (NNPC) exploded on Saturday say over 100 people were burnt in the fire.

Some of the bodies, they claimed, were burnt beyond recognition while scores of corpses were still in the bush where the explosion occurred.

Residents also raised an alarm over the humanitarian disaster due to the fast decomposing bodies, stench and pollution of the swamp and the environment.

A visit to the area on Sunday showed that the number of human casualties grew because many of the villagers were in the swamp scooping petrol gushing out of the ruptured NNPC pipeline. Also affected were a number of palm wine tappers and local brewers of Ethanol who were in the swamp.

Villagers said over 100 people were trapped in the huge fire because there was a free-for-all scramble for leaking petrol by the villagers before the explosion.

A villager who gave his as Ogechi Nnamdi said: “Nobody at the scene of the explosion survived. People were rushing to the leakage site to scoop free fuel, suddenly we heard an explosion. At least, I saw about 20 dead bodies. 11 had been carried away. And more are in the swamp yet to be recovered. And it is difficult getting inside the swamp now because we are in the rainy season”.

He called for the decontamination of the area by the government to avoid the spread of diseases.

Some of the villagers were observed recovering the charred bodies from the swamp and burying them in mass graves.

Most of the volunteers were not putting on medical gears to prevent infections from the fast decomposing bodies. There was no presence of emergency officials from the Oyigbo local government, state or the Federal government at the time of the visit.

Our correspondent was assaulted by the pungent smell of decomposing corpses oozing out from the environment.

Hon. Promise Chibuzo Nwankwo, the House Of Assembly member representing Oyigbo Local Government Area expressed his condolences to the families of victims of the disaster. He also condemned the activities of oil thieves who caused the disaster.

According to the lawmaker, “In the early hours of Saturday, 22nd June 2019, around 8:25 am there was an incident of fire outbreak in Oyigbo Local Government Area.

“The fire outbreak which occurred in the Nigerian National Petroleum Corporation(NNPC) facility somewhere around Canaan Land Hospital, Izuoma Axis of Oyigbo local government area is as a result of oil bunkering.

“Until now the number of people injured is unconfirmed, but it is confirmed that scores of people were recorded dead.”