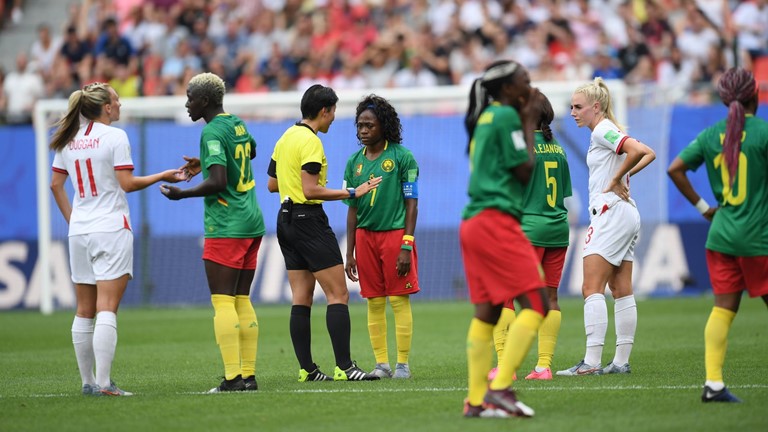 Cameroon should be investigated for their behaviour during the Women’s World Cup defeat to England, claims CAF’s women’s football committee chair Isha Johansen.

England’s 3-0 last-16 victory on Sunday was marred by controversy, with Cameroon’s players and coaching staff enraged by several VAR calls.

Ellen White’s strike to double England’s tally was initially ruled out for offside, but the video review system confirmed the goal should stand – leading to Cameroon’s players making emotional pleas to the referee before seemingly refusing to play on.

Cameroon head coach Alain Djeumfa was also involved in pitch-side protests, with the Indomitable Lionesses’ frustration compounded when they had a goal disallowed by VAR for a marginal offside early in the second half.

Djeumfa later defended his players, claiming his side suffered a “miscarriage of justice” following England coach Phil Neville’s assessment of Cameroon’s behaviour as “unacceptable” and ‘‘shameful”.

And Johansen has called for an inquiry into Cameroon’s conduct.

“Whilst remaining proud of our African teams that participated in the FIFA Women’s World Cup, yesterday’s match between England and Cameroon reflected badly, not only on African women’s football but African football on the whole,” Johansen said in a statement.

“It is an issue which will be addressed and dealt with at the appropriate levels of governance.”

Johansen, however, insists that any investigation must also take into account the reasoning behind Cameroon’s frustration.

“Clearly when something happens like what happened, the disappointment that we saw on the pitch, we as Africans felt for Cameroon as a family, as one,” Johansen told BBC Sport.

“We take the collective blame, but at the same time, without sounding like we are condoning what happened, I think it’s all about now actually understanding why it happened.

“These are the issues that I think CAF has got to address and will address, clearly so we can avoid the same mistakes happening.”

Cameroon were not the only African nation angered by a series of VAR decisions in the last 16, with Nigeria feeling they were hard done by in their 3-0 defeat to Germany on Saturday.