Our performance was crippled by Ambode's government, LWC laments 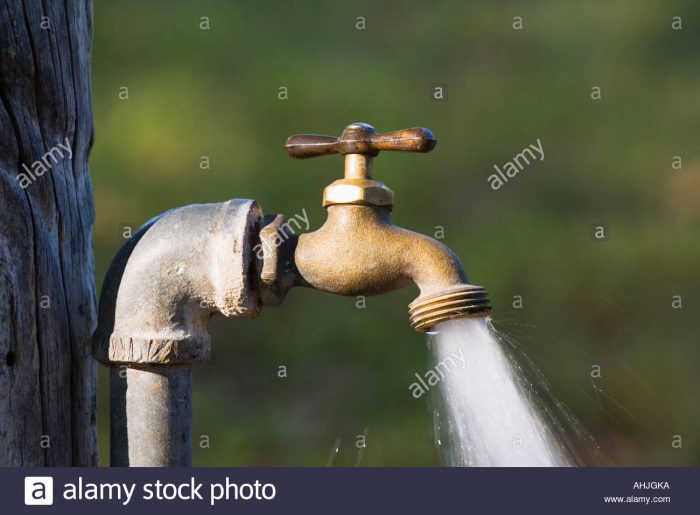 The Lagos Water Corporation, LWC, has continued to lament the crippling of its activities and performance by the immediate past Government of Akinwunmi Ambode due to extreme starvation of funds.

Findings have revealed that in the last four years, there had been several complains from the public of epileptic water supply to teeming homes in the metropolis, as staff of the agency battled tooth and nail to meet the demands of the people.

The Corporation headed by Engr. Muminu Badmus as Managing Director, since 2015 had struggled to bridge the water supply gap of Lagosians, but to no avail due to paucity of fund.

It was learnt that the production capacity in 2015 even with the Independent Power Project, IPP was 52MGD per month, which represented less than 26% capacity utilization, this was improved to over 70% capacity utilization under the watch of the current Managing Director, As at this period Adiyan and Iju Waterworks have been permanently disconnected from the National grid with an outstanding debt of N53 million which was supposed to be paid by the State.

It was gathered that throughout 2018, the Corporation could not access its budget at all, while in 2016 and 2017 only two-quarters of chemical subvention was released, coupled with the issues of power supply, which had made it impossible to continue to produce water constantly.

Our investigation revealed that in an attempt to persuade Ambode to release funds for the Corporation operations, several letters were written to him, through the then Commissioner for the Environment appealing to him to come to the rescue of the Corporation, to which there was no response.

“This has shown that the water sector is not given the due recognition it deserves and that the provision of water supply is not a priority,” a source disclosed.

Findings also revealed that the Independent power provider had to ration power supply due to non-payments of its monthly power charges for over one year which was handled at the state level by the Ministry of Energy, after several letters were written to the then Commissioner for Energy and the Commissioner for the Environment for their intervention.

It was learnt that when there was no response, the LWC had to take urgent steps to reconnect to IKEDC to secure regular power supply, which entailed having a payment plan to repay the outstanding N53 million owed them.

Further dig revealed that the corporation had been faced with delay in payment of workers salary, as the workers were owed several arrears, with lots of unremitted pension deductions, and retirees owed gratuities and pensions.

It was also learnt that since then the corporation had made pragmatic efforts to ensure that salaries were paid latest by the 28th of each month until in the last five months to the end of Ambode’s administration.

The reason for this, it was gathered, was largely due to the decline in the revenue base of the corporation as a result of intermittent water supply due to unavailability of reliable power supply and chemical to sustain production.

Also, sources revealed that the corporation had made efforts towards the payment of pension deductions until in the last few months, which was as a result of the payment plan it had with IKEDC where it paid close to N17 million monthly just to ensure sustenance of power for water production.

To compound the misery in water sector, it was disclosed that the past administration of Ambode stopped the ongoing construction of 70Million Gallons per Day (MGD) Adiyan II to supply water to western part of Lagos, largely by stopping the funding of the massive project. It is worthy of note that the 70MGD Adiyan II commenced during the Fashola administration.

The source also unveiled that throughout the four (4) years administration of Ambode, there was no single waterworks constructed as part of his efforts to tackle water challenge in the State, this is against the meaningful efforts put in place by his predecessors. “The two (2) waterworks (2MGD Mosan Okunola and 4MGD Otta-Ikosi) commissioned during his tenure (2016) were constructed by Raji Fashola administration”.

“The Corporation was in a big mess under Ambode, we battle to get funds for common water treatment chemicals, and other meaningful water projects that is suppose to get his attention and transform Lagos to a State of abundance got killed by his administration; and this resulted to inability of the Corporation to provide water to all in the State”, source said.

To address the water demand gap of 65%, the LWC in its commitment and efforts developed the Lagos State Water Supply Master Plan and the Lagos State Water Corporation five-year strategic plan as a roadmap to tackling the challenge of water production and supply, but never yielded any positive or meaningful impact due to nonchalant attitude of Ambode.

The corporation, in the last five years, has made several efforts to close the water demand gap through PPP (Public Private Participation). This has however been slowed in coming to realization as a result of delay in approvals from the state government.

Honestly, we cannot continue to run away from our shadows, Lagos, a resilient state and the commercial hub of Africa, with the population of over 22 million people withLagos Water Corporation as the Water utility agency of the State Government can only bridge water demand gap and sustain its operations with the adoption of Public-Private Partnership (PPP) as research has shown this clearly.

It has been realized by governments world-wide that funding of government programmes and projects can no longer be sustained by government alone.The State government is busy with other capital-intensive infrastructural development projects such as Security, Roads, Transportation, Waste management, among others. Provision of Water to citizens and residents of Lagos State will require over $10Billions USD which cannot be funded alone with tax payers money. Water supply in the state should be private sector-driven projects, as this is the only way forward.

Considered that annual population growth rate in Europe is only about 0.22% compared to 3% of Sub-Saharan Africa, it is quite imperative that African states urgently seek alternative means of funding infrastructure development in the water sector.In Ghana, the private sector is equally involved in urban and small-town water provision as government strives to improve access to water supply services for its citizens in line with sustainable development goals.In Nigeria, many state governments have equally opted for the PPP model in water supply.

To ensure Lagos residents have un-hindered access to safe water, Mr. Babajide Olusola Sanwo-Olu led administration, must focus on PPP and should also come to the immediate aid of Lagos Water Corporation to avert total collapse.