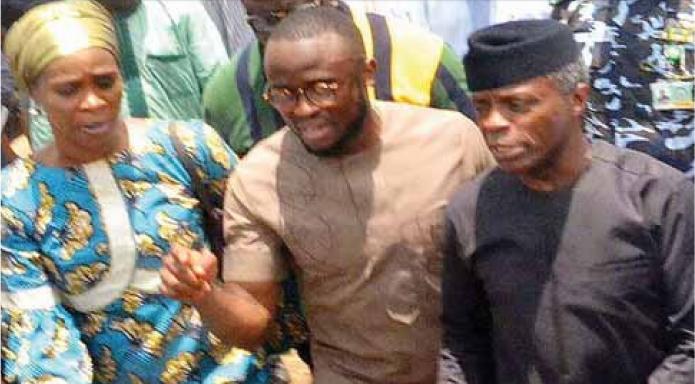 In a country scoffed for “eating its young,” it is a rarity to find young people in Nigeria thrust with significant national responsibility. At just 31, Uzoma Nwagba is driving Africa’s largest social enterprise programme. He is the Chief Operating Officer (COO) of the Government Enterprise and Empowerment Programme (GEEP), one of the National Social Investment Programme (NSIP) under the Office of Vice President, Prof Yemi Osinbajo.

Implemented by the Bank of Industry, GEEP comprises FarmerMoni, MarketMoni and TraderMoni products with a current total of about 2 million beneficiaries. The technology-driven collateral-free and interest-free micro-loan scheme is an integral part of the Federal Government’s financial inclusion agenda.

The young Harvard MBA graduate, who also holds a First Class in Electrical Engineering from Howard University, is leveraging his experience in finance and technology as he steers the government initiative full throttle. A typical day involves Nwagba wearing different hats as he drives stakeholders in the project including vendors, technology partners, agent networks, payment partners, government officials, and debriefing and mind mapping sessions with BOI’s Executive Director, Mrs. Toyin Adeniji. Other days, you can catch him in full action on the field with his sleeves rolled up, directing delegations of high-powered government and bank officials in a tour of live market activations of MarketMoni and TraderMoni even as they engage the beneficiaries one-on-one. The operation of GEEP includes 4,000 agents across the country, and over 2 million beneficiaries till date.

In the words of a member of the team, “Uzo is very smart and very confident. He works even harder than us, and asks a lot of questions.” His hands-on approach to leading a young and vibrant team across Nigeria, majority of whom are under the age of 35, has been responsible for the innovation and creativity GEEP deployed to bank the seemingly unbankable at the grassroots and margins of society. And the tremendous strides and impact the programme has made in less than two years have not gone unnoticed, locally and internationally.

Riding on the success of GEEP, Nigeria’s Bank of Industry clinched the coveted award in the category of ‘Financial Inclusion’ at the 2019 African Bankers Awards. For reaching the most disadvantaged and low-income segments of the nation with collateral-free and interest-free micro-loans and ultimately contributing to financial inclusion, development and growth, GEEP distinguished itself as the most impactful financial inclusion project in Africa. GEEP fought off stiff competition from other nominee institutions in in the category; 4G Capital (Kenya), Amhara (Ethiopia), Cofina (Senegal) and Jumo (South Africa).

Reputed to be the most prestigious in Africa’s finance sector, the African Bankers Awards highlights and recognises the achievements of companies and individuals contributing to the growth, development and transformation of Africa’s financial sector and creating new economic opportunities for citizens and communities all over the continent. The Pan-African awards which held recently in Malabo, Equatorial Guinea featured financial institutions and projects from all 54 countries in Africa, as well as the international community. Other award categories and winners at the event include: Investment Bank of the Year (ABSA Capital), Innovation in Banking (KCB – Kenya), Central Bank Governor of the Year (Tarek Amer, Central Bank Governor– Egypt) among others.

Having identified the lack of access to capital as a major growth impediment of Nigerian entrepreneurs, MarketMoni targets small businesses with soft loans from N50,000 to N100,000 while FarmerMoni targets local smallholder farmers with loans starting at N250,000 and a buy-off guarantee on their produce. TraderMoni having the widest reach of the three GEEP initiatives, due to the target demography has given loans starting at N10,000. Of the over two million beneficiaries of the GEEP, the vast majority of these micro-enterprises are petty traders, merchants, enterprising youth, and agricultural workers in over 1600 clusters and markets across all 36 states of Nigeria, and the Federal Capital Territory. These traders and artisans are financially marginalized and do not have access to corporate financial services. The GEEP, especially the TraderMoni programme, is designed to adequately cater for this majority of the nation’s economy by simply using their mobile numbers as simple means to access a wide range of financial facilities.

Nwagba, an ex Product Manager at Microsoft, is said to constantly push innovation to make GEEP accessible to hundreds of thousands of micro business owners across Nigeria. GEEP is designed to deliver last mile credit delivery using an aggregation model that works with market cooperatives as the acquiring structure, and agent networks with technological tools. This group of GEEP agents is equipped with a proprietary application that enables full registration and capture of 48 data points e.g biodata, information on the market, nature of trader, pictures of trader and their trade point, GPS coordinate of the trade point, farm plot mapping, association membership and 43 other data points that enable credit assessment. Data on every captured beneficiary is first de-duplicated via facial recognition technology and BVN validation, then delivered to Bank of Industry real time to enable verification, appraisals and credit assessment. They also man a call center staffed with over 120 agents and obsessive data analytics.

Qualified applicants then get disbursements into their bank accounts or mobile wallets generated for them from the registration data. Every loan disbursed is booked automatically on a core banking system that is plugged to all commercial banks in the country, enabling beneficiaries to walk into any bank in the country and make repayments periodically over a 6-month period, or to purchase scratch vouchers locally and pay via USSD. Complete repayment leads to automated offer of the next higher loan.

Nwagba’s leadership at GEEP is built on seeking to do the impossible, values that guided him during his tenure as Student Government President during his undergraduate days at Howard University. Not shying away from the media scrutiny the programme has received in the past months, GEEP opened the doors of the GEEP Command Centre to the media allowing them to understand the workings of the programme and engage stakeholders directly. Later this year, this invitation will be extended to the public as attendees of the GEEP Command Centre Tours will get to experience an end to end process walk through of GEEP. There will also be a simulated market activation where attendees can participate in a demo registration of a beneficiary and hear from actual beneficiaries.

The Kings College Lagos old boy continues to distinguish himself in the area of leadership both in public and private. His recent selection as one of the twenty-three Desmond Tutu Fellows 2019 by the African Leadership Institute for his impact in public service, driving such a massive project across 36 states of the country, reaching over two million Nigerians is testament to that.

With a career that spans finance (Goldman Sachs, New York and African Capital Alliance) and technology (Microsoft, Redmond), the engineer-turned-public servants believes African public institutions can be run like ethical and result-oriented businesses. With the Federal Government’s audacious projection of reaching 10 million Nigerians through GEEP by 2023, the GEEP team does not appear to be letting up soon. Nigeria’s financial revolution will be digital and young Nigerians like GEEP’s COO, Uzoma Nwagba, will continue to spearhead it.