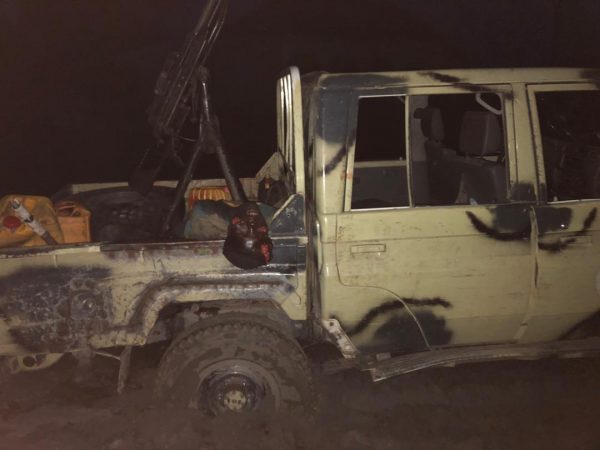 One of the Boko Haram gun trucks seized in Mafa

Nigerian troops are flaunting ‘tremendous successes’ in the fight against Boko Haram terrorists and their ISWAP mates, during clearance operations, the latest being the routing of the terrorists during an attack on in Mafa, Borno state.

Looking for food, the terrorists mounting five gun trucks and motorcycles wanted to stage an attack on Mafa and the military base on 24 June.

But with the benefit of an advance intel, troops of 112 Task Force Battalion effectively dealt ruthlessly with the terrorists.

“The troops reacted swiftly with heavy fire power forcing the terrorists to scamper for their dear lives, and recovered 2 Gun Trucks mounted with Anti Aircraft Guns and a motorcycle and the extermination of three (3) terrorists”, said Col Sagir Musa on Wednesday.

“There were indications that some of the insurgent members were wounded in an exchange of fire”, he added.

Sagir also recalled other clearance operations in which dozens of Boko Haram Terrorists (BHTs) and Islamic State West Africa Province (ISWAP) fighters who were annihilated and cache of assorted arms, ammunition, variants of gun trucks and other fighting vehicles captured from them.

“Additionally and most importantly, the operation resulted in the rescue and eventual liberation of over 100 women and children from the grip of the criminals/terrorists”.

While being conducted round the camp to assess the situation, the GOC urged the troops to remain focus and not to be carried away by the successes. He directed them to redouble their efforts and doggedly maintain the momentum until they win the war on terrorism for Nigeria through total victory against the bandits.

Similarly, he assured them of the Chief of Army Staff Lieutenant General Tukur Yusuf Buratai’s continued appreciation and support in the collective struggle to crush the insurgency.