Sanwo-Olu must help this girl or she dies 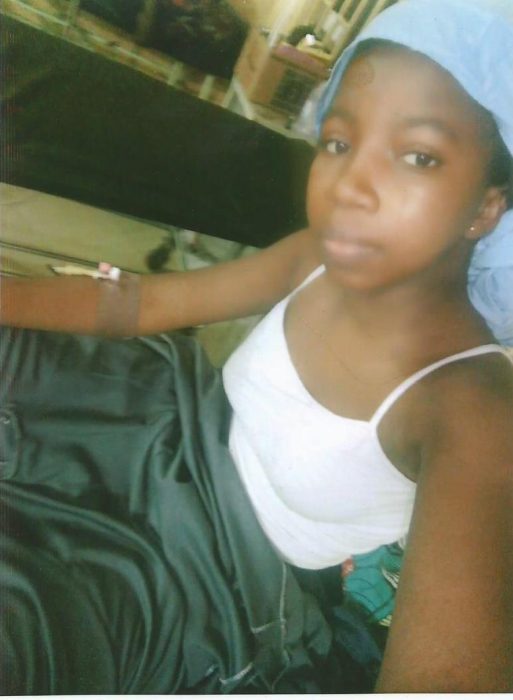 Miss Fatimo Yinus, 16, is a brilliant girl and once served as the ‘One-Day Principal’ of Falomo High School, Ikoyi, Lagos during the 2016-2017 Academic session, but now, she is battling for life as she has kidney problem.

Her brilliancy and future ambition will go down the grave with her if Lagos State Governor, Babajide Sanwo-Olu does not come to her aid urgently.

Her parents have made passionate call on Sanwo-Olu and kind hearted Nigerians to come her assistance to save her from untimely death by helping to raise the N15 million needed for the kidney transplant.

They said they decided to cry out for help to save her life because they had spent all their meagre savings on the N300,000 monthly hemodialysis session at the General Hospital, Odan, Lagos Island since the doctors at the Hospital discovered the end stage renal failure.

Narrating their ordeals to PM news at their makeshift structure at 53, Pike Street, Lafiaji, Lagos Island, the guardian to the victim, Adam Mohammed Sahara begged well-meaning Nigeria to come to their rescue to enable Fatimo stay alive.

He said: ’”It started in April, 2019 when Fatimo started swelling up all over her body and we quickly rushed her to the General Hospital, Odan, Lagos Island for treatment.

“And after several test by the doctors, they broke the sad news that Fatima was suffering from end stage renal failure and they placed her on a three times a week hemodialysis session at a cost of N75,000 equivalent to N300,000 a month till we are able raise about N15 million for the kidney transplant in Nigeria.

“We do not have the money to foot the bills for the transplant that is why we are now appealing to kind-hearted Nigerians to come to our aid to treat Fatimo to enable her stay alive, because she is a promising child who was the One Day Principal for Falomo High School for her excellence in quiz competition.

A medical report with No Sub/GHL/1085/Vol.11/13 dated 24 May, 2019 signed by Dr. Alagbe S.C. of the General Hospital, Odan, Lagos Island, Lagos State, concerning the health status of the patient reads: “The above named 16 years old Fatimo Yinus was admitted at our institution a few months ago and treated as a case of acute on chronic renal failure.

“She will need continuous renal replacement therapy with three times weekly hemodialysis until a renal transplant is done and this is not available in our facility. However, approximate price here in Nigeria for the renal transplant ranges from N10m and 15m,” Alagbe stated.

Below is her medical report: 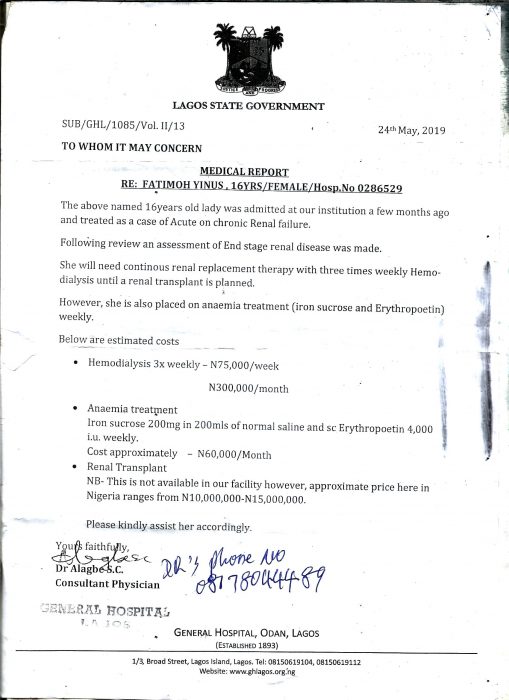