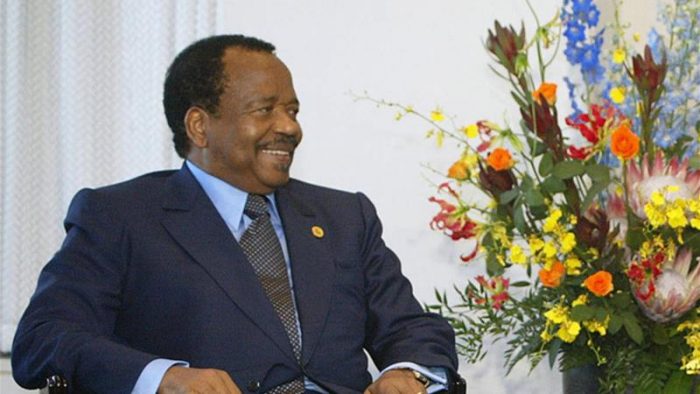 Swiss police fired water cannon, tear gas and stun grenades at Cameroonian protesters outside UN headquarters in Geneva Saturday as the crowd surged towards a luxury hotel hosting 86-year-old President Paul Biya, who has been at the helms since November 1982.

Parts of the “city of peace” resembled a war zone, with police wearing gas masks and black riot gear chasing demonstrators through Geneva’s international neighbourhood, shooting tear gas canisters into the gardens of high-end residences where some tried to hide.

About 250 demonstrators, many dressed in military-style garb and draped in Cameroonian flags, initially gathered on a square outside the UN, with laughter and loud music creating a festive atmosphere.

But things turned violent when the crowd suddenly began running towards Biya’s hotel, about 500 metres (1,600 feet) away, chanting “Biya Assassin!” and “Switzerland Complicit” as they attempted to break through tight lines of police backed up by armoured vehicles.

Police used pepper spray and turned a water cannon, mounted on top of a tank, on the demonstrators.

“We are here to demand that Cameroon be allowed to enter the modern democratic era,” said rally co-organiser Robert Wanto, a Cameroonian national who has lived in exile for three decades.

Cameroonian nationals exiled in a range of countries, including France, Italy, Spain, Britain and Denmark were said to have come to take part in the demonstration.

Police had to intervene to rescue a Biya supporter, who walked into the crowd wearing a dress with pictures of the president and shouting insults at the protestors, prompting a large group to attack her.

Geneva police said the demonstration was authorised, but limited to the square outside the UN.

They were not granted permission to march to the five-star Intercontinental Hotel where Biya, who has ruled Cameroon since 1982, is believed to have been staying since Sunday.

But Wanto told AFP before the protest the demonstrators had given Biya an “ultimatum” to leave, and would march on the hotel if he remained there.

He pointed out that Biya had made it a habit to stay at the pricy Intercontinental during long visits to Switzerland, where he reportedly comes for medical treatment.

“He thinks it is OK to come here and spend billions of our money when our country is economically sick,” Wanto said.

Another protestor, 43-year-old Axille Fofou who is exiled in France, said she had come to voice her “indignation” at the man who has “taken the Cameroonian people hostage”.

“In Cameroon, people have nothing, and he is here, spending tens of thousands of euros (dollars) each day. It is unacceptable,” she told AFP.

“Switzerland should not support this dictator. By letting him stay here, they are complicit in horrible crimes,” she added.

Outside the hotel, dozens of suit-clad men believed to be part of the president’s security detail stood guard.

Over the past week, there have already been several scuffles with small numbers of demonstrators outside the hotel and even inside the lobby.

An attack on a Swiss journalist by Biya’s supposed security staff sparked a diplomatic incident, prompting the Swiss government to summon Cameroon’s ambassador in Bern on Thursday.

“The dictator must be senile to want to transport the violence he unleashes on his country on a daily basis to the soil of a democratic country,” Wanto said.

Cameroon, a former French colony, has faced a succession of crises and is wracked by a deadly conflict between separatists and government forces in its English-speaking west.

Opposition leaders have faced mass arrests, and rights groups claim detainees are tortured and many disappear.