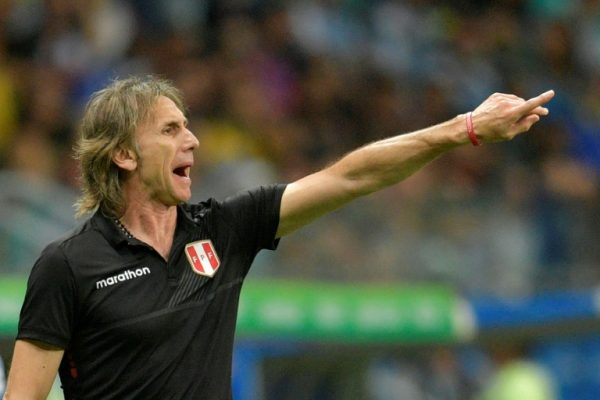 Peru coach Ricardo Gareca praised his team’s character on Saturday after they beat highly-fancied Uruguay on penalties to reach the Copa America semi-finals.

Goalkeeper Pedro Gallese made the crucial spot-kick save to deny Luis Suarez before Edison Flores netted the decisive penalty following a 0-0 draw in which Uruguay had three goals ruled out for offside.

Peru will now face Chile in the semi-finals in Porto Alegre on Wednesday.

“It was a tightly fought match against really tough opponents,” said Gareca.

“I stress that we showed a lot of character to take them on.

“It was important to work hard, we did that and I think we’ll play better against Chile.”

Gareca reserved special praise for Gallese, who had come under fire for a woeful performance in the 5-0 defeat to Brazil in Peru’s previous match.

“Gallese made a difference,” he said. “Gallese is a goalkeeper who has given us much satisfaction and he’s always been there in the important moments.”

On that Brazil defeat Gareca added: “We all had an afternoon that wasn’t ideal, without losing sight of who we were up against.

“Today, Gallese demonstrated how good he is and why he’s first choice in our team.”

“We look at it on a game-by-game basis, not on what we hope to achieve.

“Now we’ll play a classic match with Chile. It will be a hard matchup, but we are in a good position to come up with the win.”

Uruguay’s veteran coach Oscar Tabarez made no excuses for the defeat.

“You can’t explain the result, it was due to many things,” said the 72-year-old.

“We were wasteful in the 90 minutes, you could see that throughout the match and Peru were better in the penalties.

“We have to accept defeat and know how to lose.”

Uruguay captain Diego Godin lamented the team’s inability to turn their clear superiority and a number of gilt edged chances into goals.

“I’m proud of my teammates, it’s a spectacular group. They gave it their all,” he said.

“We had high hopes, but football isn’t always fair. We were unfairly eliminated. They were better on the penalties.”

Jose Gimenez, who made a crucial tackle to prevent Guerrero from shooting with Peru’s best chance of the match, praised the Andeans for their solid resistance.

“We were the team with the best chances (but) they played great in defence. We scored three goals, but none were legal,” he said.

“You need to have a bit of luck on penalties. We leave saddened. We had high expectations of winning it all, it’s a different reality today.

“We need to hold our heads high. This goes on. We are as sad as our fans. We will be back.”