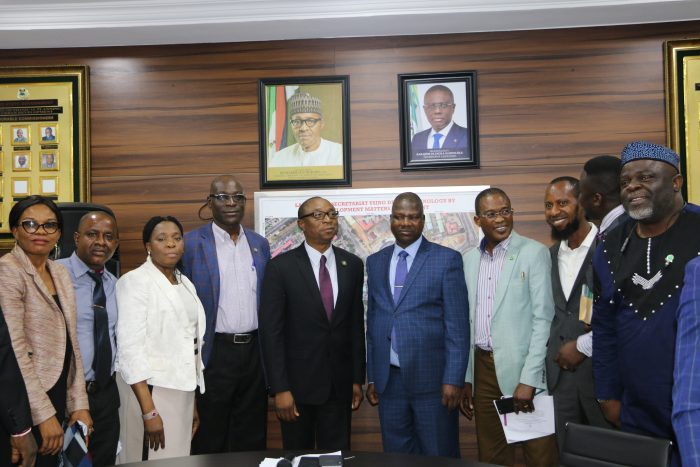 The Lagos State Government on Tuesday engaged members of the Nigerian Institute of Town Planners (NITP) in a bid to consolidate institutional support for the attainment of its livable city goal.

While receiving members of the Institute in his office in Alausa, Ikeja, the Permanent Secretary, Ministry of Physical Planning and Urban Development, Foluso Dipe noted that the interaction was a welcome development which provided the opportunity to brainstorm on major areas the Ministry and the Institute could work together as major stakeholders in the built environment.

He said that the Nigerian Institute of Town Planners, which had always supported the Ministry morally and technically, needed to work more with government towards resolving challenges in Environmental Planning, Management and Development.

He stated that Physical planning as a major focus of the Lagos State Government necessitated that all stakeholders must act positively in charting the right course, adding that efforts should be focused on fashioning out new technology to ease building plan approval.

Earlier, the Chairman of the Lagos chapter of the Nigerian Institute of Town Planners, Adebisi Adedire (FNITP) had advised the Lagos State Government to accelerate the passage of the Physical Planning Regulation and Allied Matters of Lagos State into law to enhance effective physical planning and urban development in the state and ultimately benefit the citizenry and the government.

He also sought the quick passage into law, the Land Use Plan and Analysis Report (LUPAR) and advocated the training of government personnel on the implementation procedure of the regulation, while pledging the continued support of the Institute for the laudable policies and programme of the Lagos state Government in the built environment.