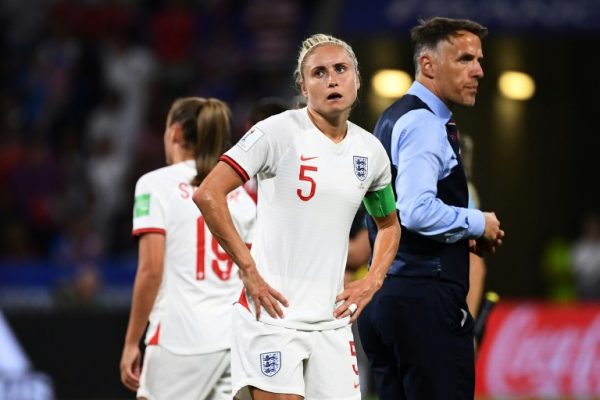 England’s women’s team have suffered another disappointment, being denied a place in the FIFA Cup final, for the third consecutive time.

Their players cut dejected figures on the pitch at full-time at Stade de Lyon.

“Football can be cruel. We have had a fantastic ride. When we got the penalty I turned to my bench and said ‘we were going to win it,’ but it wasn’t to be,” coach Phil Neville told the BBC.

Four years ago it was an injury-time own goal that cost them against Japan, and this time they are left wondering what might have been had captain Steph Houghton converted her spot-kick

Perhaps Nikita Parris should have been given the chance to make up for her penalty misses against Argentina and Norway earlier in the competition? Jill Ellis’s side will not be too worried about that, as fortune favoured them.

For the USA team, winning goal scorer Alex Morgan hailed goalkeeper Alyssa Naeher after her late penalty save from Houghton allowed holders the United States to claim a dramatic 2-1 victory over England in their women’s World Cup semi-final on Tuesday.

On her 30th birthday, USA co-captain Morgan headed home just after the half-hour mark in this last-four showdown to put her team back in front after Ellen White had cancelled out Christen Press’s early opener.

But after an open first 45 minutes, the second half was dominated by more VAR controversy, with England having another White goal disallowed for the tightest of offside calls following a review by the Brazilian referee.

Phil Neville’s team later benefited from Edina Alves Batista’s decision to award them a spot-kick when Becky Sauerbrunn made the slightest of contact with White in the box, yet Houghton’s kick was stopped by Naeher diving low to her right.

England finished with 10 players after Millie Bright was sent off for a second yellow card late on, and the USA held out, despite playing the whole match without Megan Rapinoe.

Scorer of all four US goals in the previous two rounds, the 33-year-old played no part due to a hamstring injury.

“Alyssa Naeher should be the player of the match today. She saved our butts today,” said Morgan.

“I’m so proud of every player who stepped up tonight. Our bench is so deep, and we showed that tonight. How can you beat this?”

They will now go on to face Sweden or the Netherlands in Sunday’s final, as they aim to win the trophy for the fourth time in eight editions.